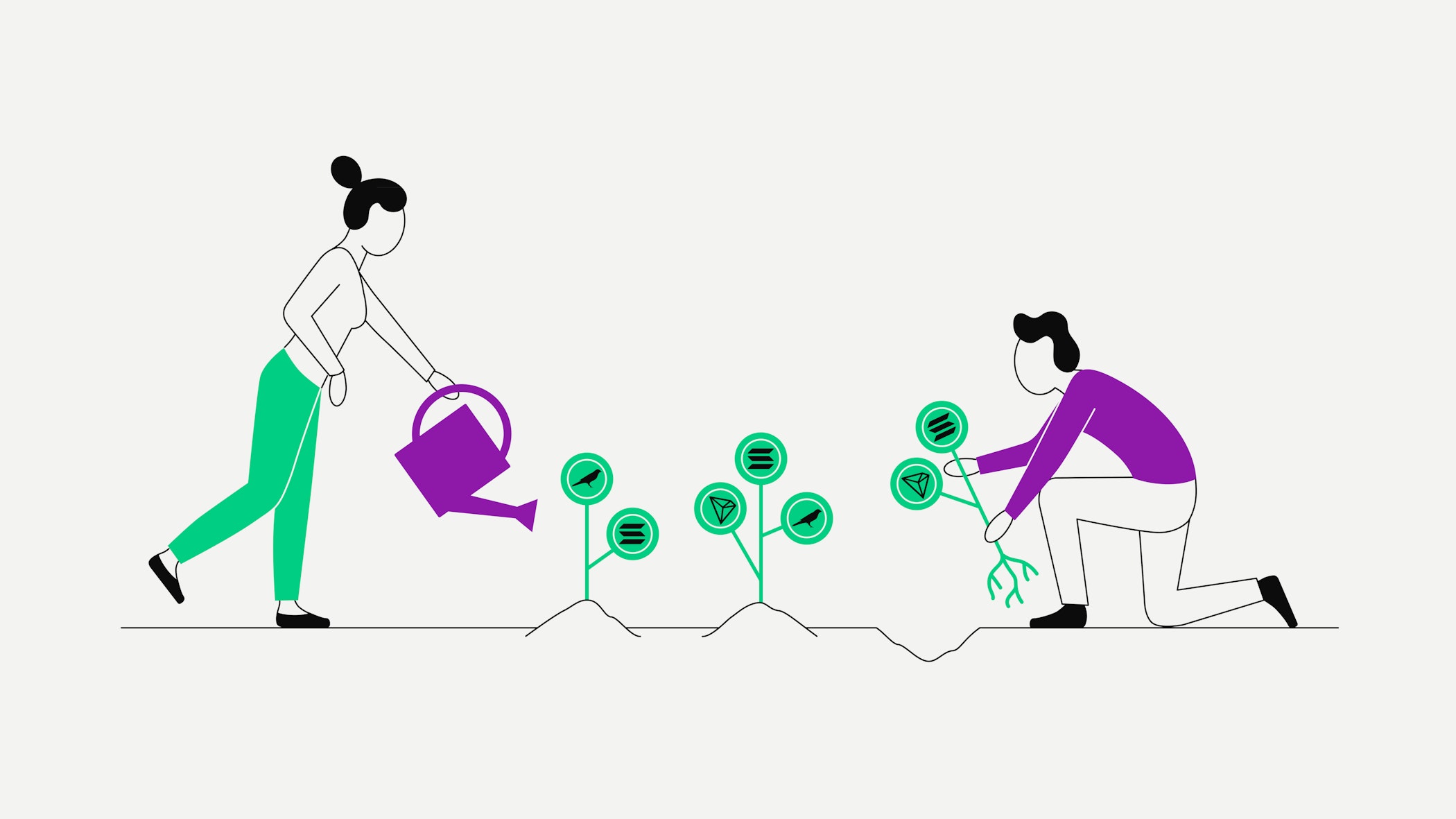 In the previous lesson, you learned what staking is and how crypto traders can earn extra income by securing a network with their coins. Now let’s look deeper into what to consider before staking your coins.

In this lesson, find out which considerations matter before you start staking.

Just like earning interest payments on deposits in savings accounts in traditional banking, decentralised finance enables holders of cryptocurrencies to earn extra income by staking their holdings in projects based on Proof of Stake (PoS) or Delegated Proof of Stake (DPoS) networks. While this way to generate extra income is increasing in popularity, there are a number of things that you should consider before you start staking your coins.

Can I stake any cryptocurrency?

Before you set out on your journey of staking, it's important to know that it is only possible with certain cryptocurrencies. Not all cryptocurrency projects support staking. And if you’re asking “Can I stake Bitcoin?”, the answer is, unfortunately, no.

Consequently, you need to make sure that the network of your choice uses a PoS consensus algorithm, not a Proof of Work (PoW) algorithm like Bitcoin. In a PoS consensus, the validation of transactions and addition of new data is carried out by validators and not miners, like in a PoW network.

Validators in a PoS network are chosen at random to validate blocks depending on the size and age of their stake, putting validators with larger holdings at an advantage. In a DPoS network, witnesses are elected by all participants, thus increasing the chances of participants with smaller amounts.

What is “nothing at stake”?

Apart from the fact that validators holding a significant amount of coins will receive a majority of all future coins, just like PoW projects, PoS networks are also not immune to 51% attacks since, theoretically, a single participant can also own 51% of the shares in the network.

Further, there is the hypothetical problem of "nothing at stake", in which a fork can occur when two nodes in the network meet the necessary conditions to add a block. This fork is resolved again if nodes sign only one of the following two transactions (the “orphan block”). However, if 99% of all nodes in such a case acknowledge both chains since they have "nothing at stake" as there is no opportunity cost to forging in a particular blockchain, the remaining attacking percent can theoretically issue coins in one chain and verify them in the other, thus double-spending.

Validators in a PoS network are chosen at random to validate blocks depending on the size and age of their stake, putting validators with larger holdings at an advantage.

Peercoin was the first coin to implement a Proof of Stake consensus algorithm and others quickly followed suit. While Ethereum is getting closer to switching to a PoS algorithm to become Ethereum 2.0 (ETH2), numerous new projects entered the space over the past few years, including networks such as Tron (TRX), Tezos (XTZ), Solana (SOL), Cosmos (ATOM), The Graph (GRT), Kusama (KSM), Polygon (MATIC), Near Protocol (NEAR), Cardano (ADA) and Polkadot (DOT). Let’s raise the curtain for these staking coins and what makes them unique.

Originally founded as a platform for smart contracts to improve the Ethereum network, TRON switched to its own blockchain to establish an ecosystem for DApps (decentralised applications) that is developer-friendly. The TRON network runs on a Delegated Proof of Stake (DPos) system and operations can be supported through staking TRON’s native TRX token.

Tezos is a self-amending open-source protocol that allows the representation of other projects and meta upgrades. It is based on proof-of-stake consensus and enables users in the permissionless community to participate in governance and in staking the network’s currency, XTZ (“tez”) as “bakers”.

Solana claims to be the fastest blockchain in the world to be based on a single global state, rather than fragmenting its network into layers during the scaling process. Holders of SOL, the network’s native token, can stake tokens to network validators and help to secure the network.

Design of the Cosmos project, also known as “The Internet of Blockchains”, is based on a multi-chain framework as the network connects different blockchains within one protocol, to facilitate the scalability and interoperability of assets. The consensus mechanism behind Cosmos is PoS that runs on an engine called “Tendermint”. Governance and staking in the network are ensured via the project’s native token ATOM.

The Graph provides an indexing protocol for querying networks like Ethereum, meaning that any Ethereum data can be searched through simple queries. This is done to improve the accessibility of blockchain data and to facilitate the creation of DApps (decentralised applications). Services in the Graph network are provided by its community of participants -  indexers, curators and delegators. The Graph’s token is GRT, a ERC20-based token that is used as a medium of exchange and a reward for participants.

Kusama is a growth platform mainly for developers looking to launch ambitious projects at a rapid rate. As a chain closely affiliated to Polkadot, it also functions as a test net for Polkadot applications. Kusama Nominators appoint stakes to Validators and receive a share of the rewards in the process. KSM is Kusama’s native coin and is used for staking and governance in the ecosystem’s Nominated Proof of Stake (NPoS) consensus mechanism.

The Polygon network is “built by developers, for developers” and has set out to promote the scalability and accessibility of Ethereum by running side chains linked to the Ethereum Mainnet. Data is gathered in Proof-of-Stake “groups” or “checkpoints” from a sidechain . Polygon’s MATIC tokens are utilised to not only power the system, but also for staking in the network.

Near Protocol is not only looking to provide perfect solutions for the upcoming generation of DApps. The sharded layer-1 and PoS network also claims to be the world’s first carbon-neutral blockchain, meaning that it can enable completely decentralised and linear scaling over several million nodes. The project’s NEAR token can be used for delegated staking by token holders to secure the network and to earn rewards with a specific staking pool deployed by a validator.

The Cardano network has set out to tackle issues such as scalability, security as well as social and economic integration of blockchains. All developments behind the Cardano network are based on a scientific approach and further methodological development and subject to stringent specifications. All research and findings are therefore subject to strict specifications and are reviewed by various independent agents. The network runs on a PoS consensus algorithm called “Ouroboros” and Cardano staking has grown synonymous with staking for many holders who help to run the platform with the network’s native token ADA, by operating stake pools or in the pools of other operators.

The Polkadot protocol provides a basic heterogeneous multichain for hosting a great variety of coherent data structures. This means that different blockchains called parachains which can communicate with each other can be built atop Polkadot. The objective is to enable independent blockchains to exchange information and trustworthy transactions via the Polkadot relay chain with a focus on scalability, governance and interoperability as all particulars of each parachain can be processed in parallel in different network areas. Parachains can be utilised in different ways, such as with decentralised finance (DeFi) or NFTs. Polkadot utilises a NPoS (Nominated Proof of Stake) system as its consensus mechanism and holders of the network’s token DOT can stake as validators or nominators to earn extra income with staking rewards.

How is staking profitable?

Before you start staking, don’t forget to do your research about staking the coin of your choice. Most networks have an asset minimum requirement for staking - this means that there is a minimum amount of coins that you need to invest in order to participate in staking that coin. When using a trusted exchange to stake your coins with one click, it is still important to know about the fundamentals and to familiarise yourself with your favourite staking assets before you get started.

There are several ways to earn APY for cryptocurrency investors - by staking coins, providing liquidity through yield farming to liquidity pools and crypto savings accounts.

What is the APY in staking?

In order to find out which assets are the most profitable when you are ready to start staking, make sure to check the potential staking rewards which are displayed in the estimated reward per year.

Make sure you investigate the Annual Percentage Yield (APY) of a coin. There are several ways to earn APY for cryptocurrency investors - by staking coins, providing liquidity through yield farming to liquidity pools and crypto savings accounts. Don’t forget that “annual” means “per year” and that your earnings depend on how long you stake your coins, price fluctuations and several other factors. Different coins use different time periods to calculate payouts - that is the duration from delegating coins to a stake pool that mark the starting time for delegating consensus power to a pool which creates coins in the name of delegators.

Like you remember from Bitpanda Academy’s Personal Finance section, compound interest is the interest you earn when investing an asset from the initial investment plus the interest earned on top of interest already earned. In the case of staking, the underlying concept involves automatically staking the rewards you have made from staking (auto-staking of rewards) and to earn additional tokens this way. Don’t forget that there is no guarantee as the staking process is randomised and price fluctuations need to be taken into account.

What is a lock-up (lock-in) period in staking?

If you stake your coins, it is also important to know that some coins have certain parameters for staking such as “warm-up periods” (also called “vesting” by some projects) and “lock-up periods” (also called locked-in periods). This means that some projects may require you to stake your coins for a set amount of time before you are eligible for staking rewards. Many projects require you to “lock up” your assets for staking, which means that once you have started staking your coins, you won’t be able to access them for some time or “unstake” them, which means you can’t sell or swap your coins while they are staked, even if there is a massive price decline.

Don’t forget to pay attention to the risks of staking

This finally brings us to the risks of staking - no matter how excited you may be about a project’s high projected APY, don’t forget that all cryptocurrencies tend to vary widely and strong price fluctuations may affect the income you earn. Also, there are numerous fake projects online which may be trying to scam you out of your coins by directing you to fraudulent websites, asking you to transfer your coins to a different wallet address or which try to entice you with promises on staking earnings that sound much too good to be true - because they are not.

Now that you know about the basics of staking, in our next article, you are going to learn how to start staking crypto.

Crypto Staking 101 - What is staking?