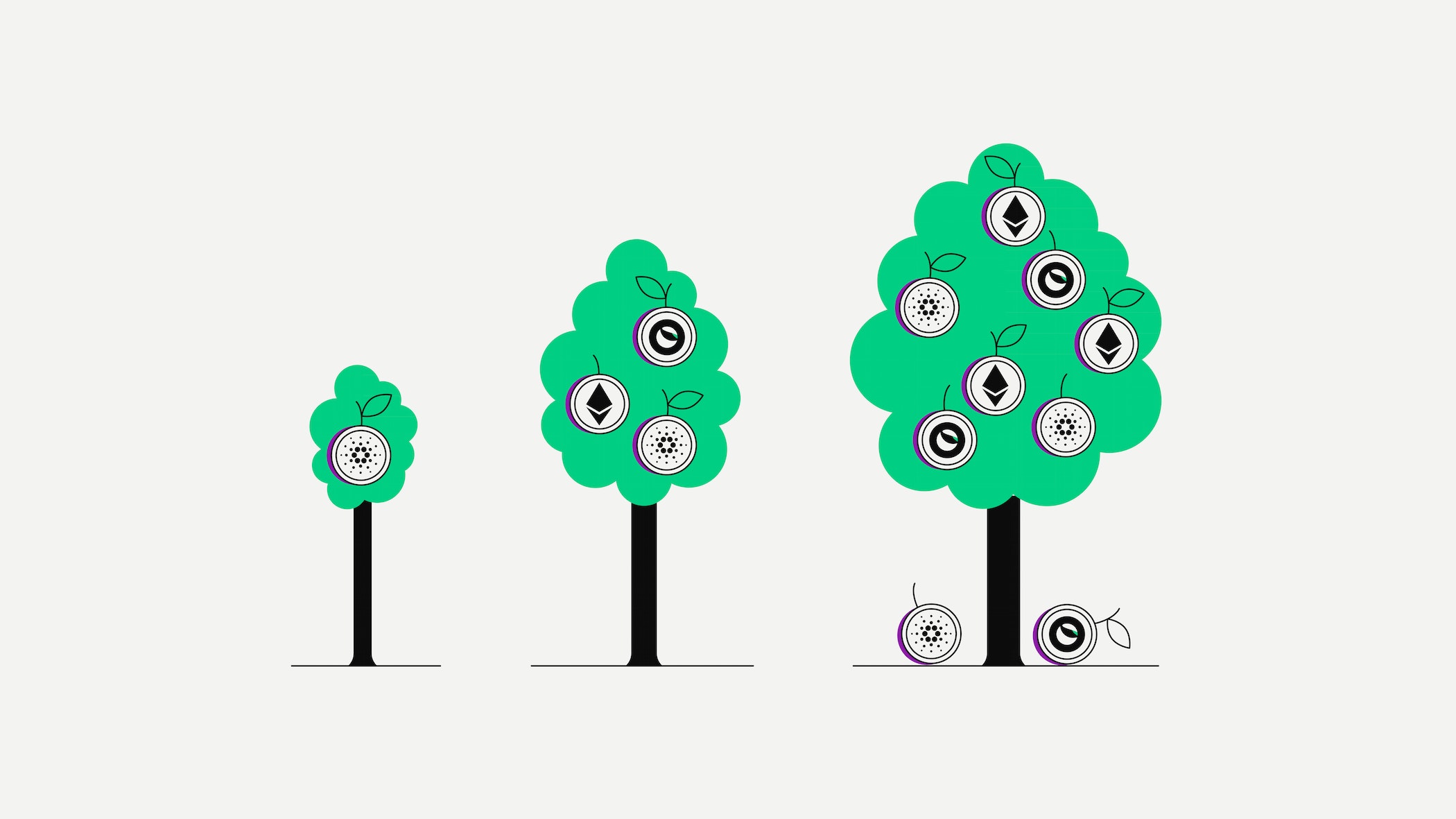 Staking is the process in which participants in a network earn rewards by locking their coins into cryptocurrency wallets to validate network transactions or to supply liquidity to others.

In this lesson, you will learn about the meaning of staking cryptocurrencies.

Like you learned in lesson 8 in the beginners’ section about Bitcoin mining and in lesson 6 of the intermediate section of the Bitpanda Academy about Proof of Work, Bitcoin is created in a process called mining based on a consensus algorithm called Proof of Work (PoW).

As PoW processes involve a lot of computational power and thus very high energy consumption as well as the need for expensive equipment, an increasing number of altcoins are using, or looking to switch to, a Proof of Stake (PoS) consensus algorithm instead that is more environmentally friendly.

The reason why a Proof of Stake (PoS) network is considered more environmentally friendly than a PoW network is the fact that it is not the fastest miner to solve a computationally complex calculation who then becomes the one to receive the reward but a validator who staked an amount of network tokens and is selected at random, however, the duration and amount of coins staked are also a factor affecting which validator is selected.

In a PoS network, users lock their tokens into a smart contract to become validators on a network. Validators in the network ensure that the network is always online, up-to-date and that no participant is cheating the network and taking over control. The tokens - often a network’s native token - are staked, that means “locked-in” the project’s blockchain. The concept behind staking a coin is similar to that of a time deposit at a traditional bank, which pays the user interest on their deposits - in this case a user receives rewards and generates returns for staking their assets in the network.

In Delegated Proof of Stake (DPoS) networks, algorithms are looking to democratise the PoS process by introducing additional rules into the selection of validators. This is to increase the probability that participants with smaller stakes also have chances of being selected for the validation of a new block. Here validators are not directly elected from all participants but all participants receive voting rights depending on the number of their coins to elect representatives, witnesses or delegates. In DPoS networks, witnesses are responsible for validating blocks while delegates supervise the network and monitor security, propose network changes and instigate governance processes.

How does staking work?

Once they have set up their clients and ensured that their setup is secure and up-to-date, validators in a PoS network are selected randomly by an algorithm when a block of transactions is ready for processing. As validators have vested their funds in the network and receive extra income in form of rewards for validating blocks, they have an interest in the success of a network rather than sabotaging it. Nevertheless, a large number of PoS protocols still requires interested parties to stake a relatively steep amount to participate, pricing out many would-be validators. This is one of the disadvantages of staking as validators with large amounts of holdings in a coin are more likely to be selected to validate the next block.

Why does staking exist?

In order to ensure that a network is secure, operating properly and remains highly decentralised, network validators need to commit to keeping the network relevant and running at all times, act benevolently towards the network and validate transactions as well as to stake part of their holdings in a network’s native token.

As validators have vested their funds in the network and receive extra income in form of rewards for validating blocks, they have an interest in the success of a network rather than sabotaging it.

However, an increasing number of decentralised finance (DeFi) applications offering decentralised financial services built on blockchains is moving into a segment traditionally covered by banks and other central financial institutions and offering users the opportunity to deposit (“stake”) their assets into liquidity pools to provide capital to other users and to earn extra income for this, similar to getting interest payments from traditional bank.

Staking has been gaining traction in the crypto community as an increasing number of users are looking to generate returns with their crypto assets on DeFi platforms, with centralised and decentralised platforms alike offering these services to potential participants. Yield Farming is the practice of yield farmers lending or staking coins on decentralised exchanges (DEXs) in order to generate extra income through interest and other rewards in the form of cryptocurrency.

VERY IMPORTANT! Pay attention to the difference between transferring funds and delegating funds

Holders of tokens opt to participate as validators in a Proof of Stake (PoS) network to support in validating transactions and creating new blocks looking to receive rewards, like transaction fees, in return. It can be compared to someone putting money into a savings account and receiving interest on it while it stays deposited. Therefore, staking is the equivalent of locking a certain amount of coins in a staking wallet or in the nodes of a blockchain for a set period of time and returns depend on the duration of that time period and the amount that was staked.

Numerous projects offer participants wallets that are developed especially for a project to make it easy for users to store, transfer and receive coins and many of those have their own staking feature built-in. Downloading and using the correct version of a project’s staking wallet is necessary before participants can start staking. *Please note that wallets you download as apps to your mobile phone or browser extensions are hot wallets, meaning they are online. Make sure to store your funds securely. It’s worth your while to only keep minimal amounts of funds in hot wallets. Also review your personal safety measures regularly.

What are some the advantages and disadvantages of staking?

While more experienced crypto traders may opt for staking directly by running their own node, newbies may opt to participate in staking via a cryptocurrency platform and stake their holdings via the platform directly on their wallets. In this case, participants can quickly and easily enable the staking function on their wallets without losing time.

Due to the high volatility of cryptocurrencies, their value may rise or fall very sharply within a short period of time. Since staking a coin means that the participant staking is automatically a provider of liquidity over a set period (also called an “epoch”), the staked coins are automatically “locked-in” the blockchain for that period and cannot be sold or utilised otherwise during this time.

If a coin is locked-in during a staking period and its price starts falling rapidly all of a sudden, stakers run the risk of incurring large losses.

Hence if a coin is locked-in during a staking period and its price starts falling rapidly all of a sudden, stakers run the risk of incurring large losses. This phenomenon is described as "impermanent loss".

The risk of impermanent loss is somewhat lower when using stablecoins that are pegged to a fiat currency. In addition, there are platforms that offer their users staking without a lock-in period. In this case, the coins can be withdrawn for sale at any time, however, users do not receive any staking rewards from the time of withdrawal.

Scams in the crypto world are unfortunately alive and well and increasing in line with the popularity of staking. As always, it is of the utmost importance to research any projects before any coins are delegated for staking, especially the age and reputation of any project and underlying technology which may be prone to coding errors. You should also always check whether a centralised or decentralised exchange keeps their funds in cold storage or in hot wallets which may be susceptible to hacks.

Finally, if you are looking to be a validator and you want to set up your own node, be aware that you are expected to provide expert service to the network with a stable online presence 24/7 and state-of-the-art operations as errors by validators are sanctioned by the network. Another disadvantage is that numerous networks require very high and costly stakes for would-be validators to join a network - that PoS systems favour stakers who are able to contribute large amounts of funds is one of the biggest and best known drawbacks of this consensus algorithm.

Read our next lesson to find out what else you need to consider before you start staking crypto.