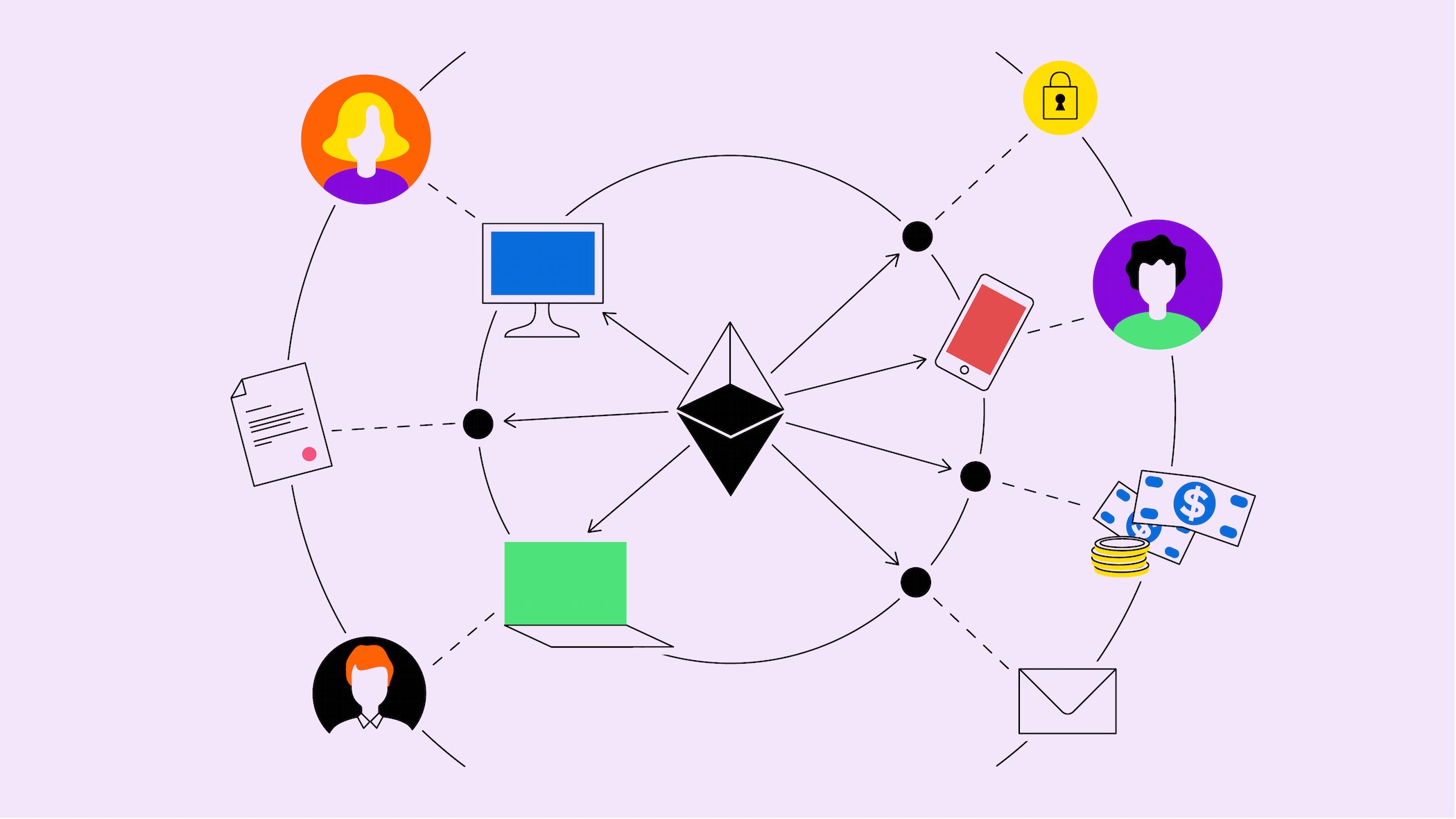 Projects like Ethereum, EOS and others are aiming to decentralise applications. DApps keep user data secure in multiple locations, instead of on just one server.

In this lesson, you’re going to learn about decentralized applications (DApps).

The origins of decentralised applications (DApps)

Presently, many of us heavily depend on our favorite apps on our mobile phones. While using them, we are trusting that our personal data is safe with the providers. In fact, a large share of online businesses provide services to their users free of charge. In return, users (silently or officially) agree to have their data or fragments of it sold for profit to advertisers.

Take “free” email providers, for example. Advertisers are allowed to access your inbox and to produce revenue through ads targeted at you while you read your emails. While this practice is common, it has nevertheless been subject to criticism, having caused international outcry that reached the highest political levels. Such was the case in the Cambridge Analytica data scandal of 2018, when user data had been extensively harvested from user profiles of the world’s largest social network and sold for purposes of political advertising.

In addition, several cases have come to light where user hackers captured sensitive personal information of millions of users on international platforms.

The launch of Ethereum in 2015 and ICOs started paving the way for decentralised applications that harbor huge potential to provide solutions for this problem.

What is a decentralised application?

At their core, decentralised blockchain applications, or “DApps,” are very similar to the apps we know and love, with a few key differences. Since DApps are tied to blockchain networks like Ethereum, a copy of data is stored on all computers in a blockchain network. This means that by definition, no one individual or group controls a DApp.

In the most basic sense, a DApp is a computer program that actually exists and runs on the blockchain. All web apps consist of two components - a frontend (on your computer) and a backend (on the respective servers). The difference with a DApp is that the backend component exists on the blockchain.

Unlike traditional apps, DApps are also controlled by and funded by their users, like Ethereum and Bitcoin are.

Like most applications(apps) used today, DApps can be used in applications from games to social networks and even browsers. Simply put, DApps are not much different from other blockchain-based networks such as Bitcoin. A decentralised network is operated and kept safe by a group of peers that get paid for their efforts based on network consensus.

Circling back to the browser example, in 2016, the Brave browser was launched as the first browser that paid users in its own native ERC20 token called the “Basic Attention Token (BAT)”. Fundamentally, the Brave browser, looks and functions like other browsers. In fact, it is based on the same structure as Google Chrome, you can link it to your email address and even link your bookmarks from another browser.

The Brave browser blocks outside advertising and trackers with an ad blocker. However, users are offered the option to be displayed certain advertisements that hardly track user behavior, thus respecting user privacy. Users who do opt in to see targeted pop-up ads receive revenue paid out in Basic Attention Token (BAT).

In terms of tracking, the browser only analyses surfing behaviour of users for advertisements displayed on Brave. All data is stored on the Ethereum blockchain and distributed among thousands of computers. It goes to show that based on how they store and use your personal data, DApps may constitute a significant milestone in reinstituting privacy.

How can I use a DApp?

With a few clicks, would-be users create an in-browser cryptocurrency wallet, like MetaMask, which works with Firefox, Brave, and other widely used browsers. A MetaMask wallet is similar to Apple-Pay. It can be used to store, to send and receive Ether and ERC20 tokens and many tokens on the Ethereum blockchain.

After transferring Ether into the wallet, users can use funds to pay for online services or to access DApps with Ether and ERC20 tokens, for instance for the game CryptoKitties.

DApps are also being used in social networks such as Steem. Steem is a social network that runs on its own dedicated blockchain and pays users for their posts and interacting with other users in its native cryptocurrency STEEM. Think of it like Facebook on a blockchain, except your data is always encrypted and you’re paid for using it. Although it is still an early-stage service, Steem has already gained some traction, also due to the fact that it is not ad-driven.

The principal risks inherent in DApps, like in other blockchain applications, lie in the fact that networks are still vulnerable to hacks. Also, at present, networks have not been able to scale up to support large numbers of users.

Take CryptoKitties, for example, a game akin to an online version of Pokémon cards, except that the cards are unique cats. When CryptoKitties, one of the world's first games based on blockchain technology, launched in 2017, 1.5 million people joined the game at its height - it was easy to understand and fairly addictive.

The history of CryptoKitties, however, went to show that presently DApps are not ready for the big time yet. Shortly after its launch, the game began to significantly slow down the entire Ethereum network. Each time users bought or sold one of their digital cats, a transaction was sent to the Ethereum blockchain. As a result, CryptoKitties had to raise the prices of their digital cats just to get transactions through, which in turn lead Ethereum miners to favour their own transactions above others, raising the issue of centralisation. However, sceptics did not have to worry for too long. After Bitcoin’s significant price drop in the beginning of 2018, CryptoKitties’ significantly declined as well.

The DAO hack and Ethereum Classic

Beyond the issue of scaling, DApps essentially carry two other major risks. Similarly to other networks, they can also potentially be hacked. Additionally, they depend on the consensus of the agents running the network. This became evident in what was known as “the DAO hack.”

The DAO (short for “decentralised autonomous organisation”) was a DApp which launched on the Ethereum blockchain in 2016 and functioned like an investor-led fund, albeit decentralised. Every rule and action of the fund was coded into its smart contracts. After its initial ICO in 2016, the DAO managed to raise $168 million in Ether.

Unfortunately, it fell prey to a smart contract attack after hackers discovered a significant weakness in its code, which allowed hackers to steal $50 million (3.6 million Ether) of its funds that year. As you may remember, once smart contracts go live, it is nearly impossible to change them in any way, which was why this bug was so serious.

Since the DAO held 15% of all Ether at that time, Ethereum developers grew worried about how this event would affect the Ethereum network. However, the community behind Ethereum could not agree on one solution. For this reason, the Ethereum Foundation which included some of the network’s most-well known developers, decided on a hard fork of Ethereum.

The future of DApps

In summary, DApps are still in their early days but they are likely not the next logical evolutionary stage of our current apps and online services, since they redefine how our data is used and how we can make and exchange money online.

What Ethereum Taught Us on How NOT to Do DApps

Some Simple Economics of the Blockchain