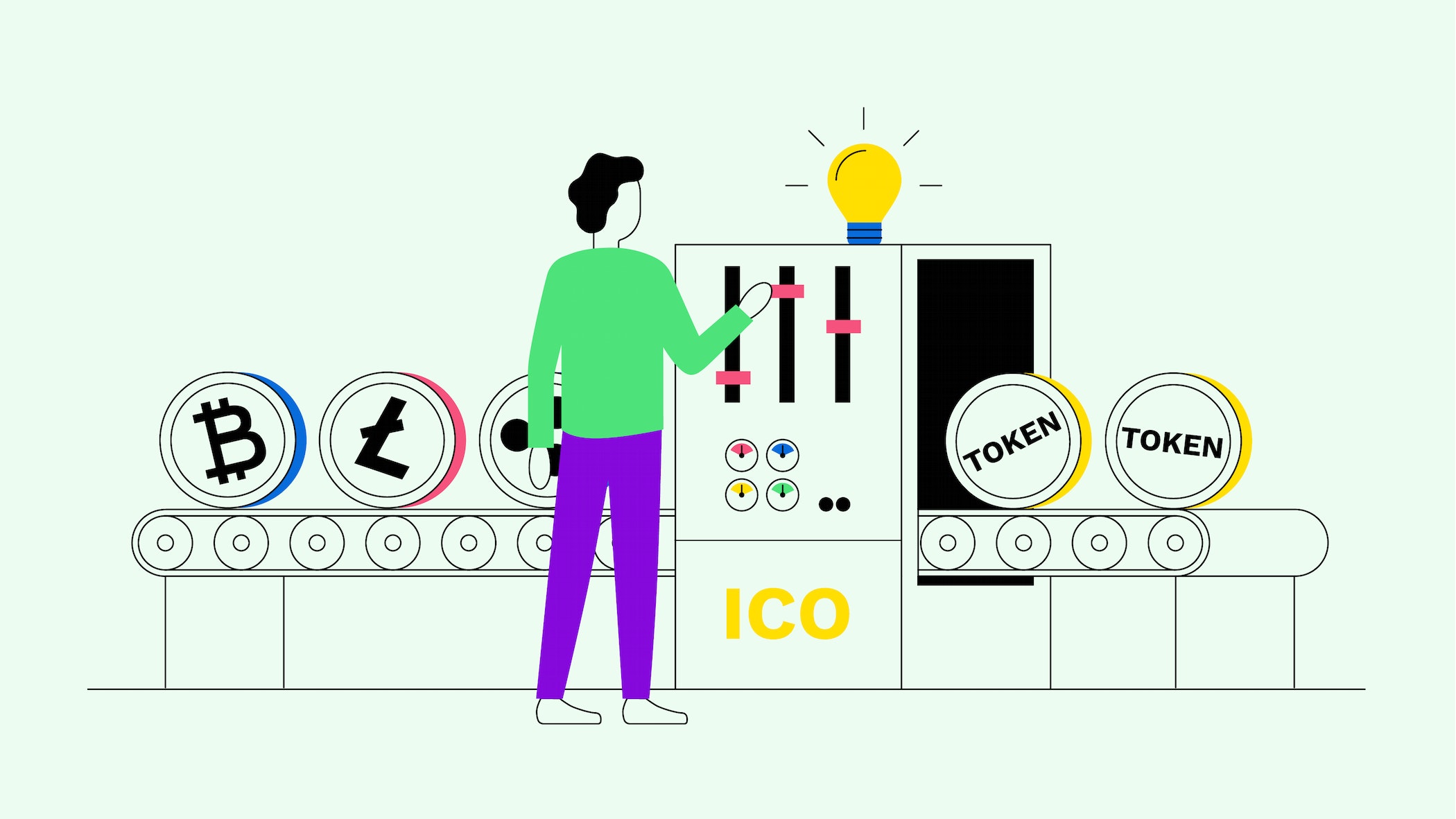 In this lesson, you are going to learn about Initial Coin Offerings (ICOs).

Where did ICOs come from?

It may have been Bitcoin that kickstarted the crypto revolution but it was ultimately the concept behind Initial Coin Offerings (ICOs) that transformed the blockchain space into the industry we know today.

As fintech developments such as online payment providers and cryptocurrencies are increasingly disrupting the global financial landscape, the ways of raising funds have evolved in line with the nature of investment opportunities and new channels of communication.

The first ICO was carried out after a software developer called J.R. Willett from Seattle wanted to develop a new protocol layer on top of Bitcoin in order to add new features. In terms of funding, he wanted to steer clear of bootstrapping - relying on personal savings or operating revenue - or conventional crowdfunding platforms or investment by venture capitalists.

Instead Willett believed that any party interested in funding his project, Mastercoin, could invest bitcoins into the project directly, without entailing the bureaucracy or giving up ownership rights involved in external funding by venture capitalists.

The advent of ICOs marked the first time that the average person could get involved in any sort of startup with the same chance of a high return on their investment, offering opportunities previously only open to large and institutional investors.

How does an ICO work?

Like you have learned in lesson 9 of the Intermediate section, ICOs, or token sales, are events where investors acquire tokens in return for funding a project in the hope that the project will be successful, the token will increase in value and yield returns. The basic idea behind ICOs was the traditional IPO (Initial Public Offering) where companies issue shares. However, ICOs were introducing a new business model.

The advent of ICOs marked the first time that the average person could get involved in any sort of startup with the same chance of a high return on his or her investment.

The main difference to IPOs was that most of the tokens issued in the scope of ICOs were utility tokens, meaning that they offered investors the rights to use a product or service rather than security tokens offering investors dividend rights or stakes in a project.

From its beginnings, ICOs fuelled a global hype as an alternate way for a company to raise funds in a transparent and democratic manner. Seasoned investors as well as greenhorns from all walks of life rushed onto the scene hoping to grab a piece of the cake.

As tokens, like cryptocurrencies, are not issued by a government or a bank and all transactions are pseudo-anonymous, ICOs in their early days completely fell out of any regulatory framework or jurisdiction.

The importance of the whitepaper

The initiation of an ICO would roughly entail a group coding a blockchain and setting up the protocol, defining a use case, coding a smart contract and beginning to mine for coins. The group would craft a whitepaper for investors outlining the details of the project to circulate it among potential cryptocurrency investors. This was to investigate interest in the project and to assess potential risks and concerns before releasing a final version of the whitepaper. This would happen in the pre-announcement phase of the ICO.

A professional whitepaper outlines what is sold during the ICO - usually tokens - and its assigned value, the total amount of capital needed and the terms of the contract. A whitepaper contains project details such as the offering outlining the benefits for investors, a solid road map of the project and a timeframe for when the project is expected to yield earnings to investors.

A professional whitepaper outlines what is sold during the ICO - usually tokens - and its assigned value, the total amount of capital needed and the terms of the contract.

This phase before a token sale allows interested investors to exercise due diligence in thoroughly analysing the project. Thorough due diligence is vital as there is no legal entity investors can make claim to in case the project is a scam. Especially in the early days of ICOs, it was quite rare that a product was really viable at this point. As a consequence, ICO scams on a global scale dotted the crypto landscape after the initial hype, leaving many investors with huge losses and bringing the entire industry into massive disrepute.

However, in our sample case of our robust and well-funded project, once an ICO start date has been set, usually about a month before the start of the ICO, marketing goes into full force based on a professional website.

The target group of such a campaign are large-scale and institutional investors. The objective is to reach them on a broad spectrum across key online channels, such as cryptocurrency websites and social media and to push the price of the coin. All in all, the challenges lies in generating as much hype as possible around a product or a company that is more often than not, industry-nascent and wanting increased exposure.

The challenges lies in generating as much hype as possible around a product or a company that is more often than not, industry-nascent and wanting increased exposure.

After the end of the marketing phase that sometimes includes a pre-sale phase, the token sale starts, either through the project distributing tokens directly into the wallets of investors or via a cryptocurrency exchange.

As outlined in lesson 9 in the Intermediate section, the main purpose of the guidelines behind the ERC20 standard is to promote interoperability between smart contracts. As a consequence, all infrastructure components such as user interfaces, exchanges and wallets can be connected to a contract in a predictable manner.

Ethereum accounts and balances are governed by a system called state transitions which are stored in Merkle Patricia Trees. Merkle Patricia Trees allow a way of structuring data which provides a large amount of information to be verified quickly and efficiently for accuracy and scalability. For this reason, the majority of ICOs are based on ERC20 tokens. ERC20 tokens bypass the limitations of the Bitcoin blockchain and use the complex data structures of Ethereum instead.

In the midst of the ICO boom in 2017, many first-time and small-scale investors believed in the power of both ICOs and the blockchain to transform investing into something that actually benefits many. Unlike venture capital investing, ICO money is associated with high liquidity and little documentation and requirements. But where there is light, there is shadow and around the beginning of 2018, at the onset of a phase with crashing cryptocurrency prices that became known as “crypto winter”, the cracks were beginning to show.

Many ICOs turned out to be scams that had stolen millions of dollars from unwitting investors or were uncovered as unregistered securities offerings. Trust from investors and early adopters dropped to an all-time low because of regulatory oversights and it became clear that the cryptocurrency space could no longer remain under wild-west conditions.

Many ICOs turned out to be scams that had stolen millions of dollars from unwitting investors or were uncovered as unregistered securities offerings.

In the meantime, the concept behind ICOs had begun evolving and Initial Exchange Offerings (IEOs) - token fundraising events on cryptocurrency exchanges - began to increase in popularity.

In contrast to ICOs, tokens in initial exchange offerings are not launched via the platform of a project, but via an intermediary exchange. Thus, not only issuers and investors are involved but rather three parties: issuers, investors and a cryptocurrency exchange. Investors buy tokens in the expectation to receive certain benefits on the platform, which are analogous to a loyalty program.

Initial exchange offerings bring a number of advantages. Depending on their reputation, exchanges can rely on an extensive user base. A listing on an exchange gives projects extensive reach, measures of legitimacy and credibility difficult to generate in other ways. Also, founders of the project issuing a token can expect the exchange to serve as a secondary market for the token after the IEO ends. In turn, IEOs increase trading volumes on an exchange.

A listing on an exchange gives projects extensive reach, measures of legitimacy and credibility difficult to generate in other ways.

The need for regulatory measures

Presently, regulatory bodies such as the Securities and Exchange Commission (SEC) are analysing current legislation that is supposed to “protect” the average investor. The Howey Test is a methodology to determine whether a venture constitutes an investment contract. Digital currencies such as Bitcoin that are decentralised are difficult to categorise as securities according to the Howey Test, meaning vast implications for cryptocurrencies.

In short, financial technology is an early-stage industry that needs guidelines and standards. Since digital currencies are an entirely new sort of asset, shouldn’t they be classified in an entirely new manner? As fundraising through ICOs continues to evolve, regulators and industry professionals will need to agree on long-term conditions for cryptocurrency-based fundraising. The age of truly a democratised investment industry has not been reached yet, still ICOs have helped to make progress by giving rise to novel methods of raising funds and are always going to be remembered as the catalyst for the blockchain revolution.

What we learned from J.R. Willett

ICO vs. Venture Capital: What is Better for Your Company