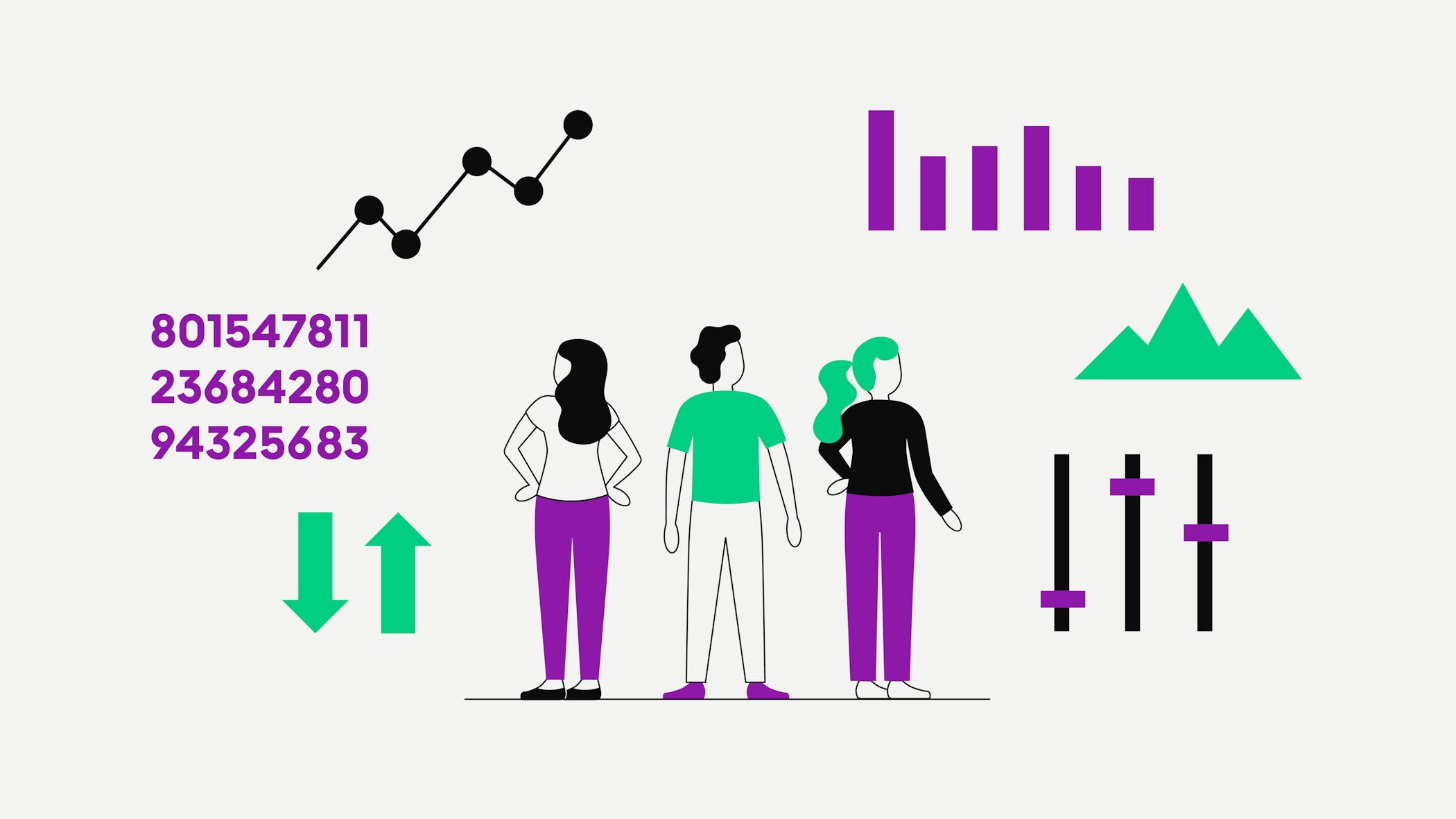 Trading indicators are valuable tools that help crypto traders analyse trends and developments during crypto trading. There is a broad range of technical indicators for traders for analysis.

In this lesson, we are introducing the most important indicators in crypto trading.

Like you learned in the Bitpanda Academy Expert section’s lessons on important bullish candlestick patterns and bearish candlestick patterns, they can be used to predict possible upcoming positive (bullish) and negative (bearish) price action for assets. In trading, it is important for crypto traders to assess potential future developments in the market of an asset and to select the appropriate strategy for their goals.

Price trends - price moves up, down or sideways

The really significant and lucrative developments are also called “trends” in technical jargon. Indicators showing trends are commonly referred to as “trend indicators”.

If you only consider the basics, price trends in a market are usually a combination of three types of movements plotted across a price chart over time: the price goes up, the price falls or the market “moves sideways” which means that is in a stagnant phase and doesn’t show much action or a significant trend.

Crypto traders are constantly on the lookout for opportunities to identify emerging trends as early as possible. A very common way to undertake this is called “technical analysis”. Technical analysis is the attempt to derive a future trend from price trends and patterns in a chart from the recent past.

Technical analysis supports traders in making decisions on which trades could be suitable and when to enter a market or to exit. Certain indicators in crypto trading show clear signals whether it is time to sell or to buy, however, several different indicators are commonly used at the same time to get a better picture of a situation in a market. Think of a trading indicator as a tool to help you make trades that are as informed as you can possibly make them.

Before looking at indicators, remember that it is candlesticks (or “candles” for short) that constitute the foundation of a trading chart. A single candle represents a day of trading while a candlestick pattern can be extended to represent a month or more of trading. In their most basic form, candlestick patterns visualise continuations or reversals of price trends - that is shifts from bull markets to bear markets and vice versa. However, it is not sufficient to rely on candlestick patterns alone when formulating a trading strategy but, in addition, it is recommended to use technical indicators to ensure that you get a balanced picture of an asset’s price movements.

Generally speaking, the simple moving average does as its name suggests: it is a line charted across the candlesticks of a trading chart. This line graph is often the first add-on to a basic trading chart. All closing prices of a certain period of time are added up and then divided by the number of those closing prices, leaving each individual closing price with the same influence on the result.

The averaging line that is calculated from this ensures that the price trend is smoothed and the reason why it moves is that each time a new price is added, the calculation’s oldest price is dropped.

Generally speaking, the simple moving average does as its name suggests: it is a line charted across the candlesticks of a trading chart.

In line with its smoothing property, moving averages supply traders with a visual impression indicating upwards trends, downwards trends or sideways trends, with the steepness of the line indicating the dynamic of the trend - the evolution of what is happening at which pace. Usually, as long as it rises, long positions are preferred and short positions are often deemed to have a greater chance of success if it falls.

Remember: Traders maintaining a “long position” are presuming that the price of an asset will increase, while traders “going short” are looking to profit from a price drop. They sell the asset, buy it back at an even lower price and benefit from the price difference.

while with simple moving averages (SMA) the oldest price is dropped when a new price is added, all existing closing price data always flows into the calculation of the exponential moving average (EMA) while the period of time for calculation is only utilised to determine the weighting factor, with more recent prices also awarded more weight than prices further back in time. The SMA is the trader’s favourite in visual analysis, so to speak, while the EMA is more commonly used in automated trading systems.

Support (levels) and resistance (levels) in a trading chart indicate prices, which appear to support or to resist the range of movement of a market. Visually, the price trend is depicted by two lines forming a type of tunnel: a support level indicates the position at which the price consistently stops to fall and begins to rise again, while the level at which the price usually ceases to rise and begins to drop again is referred to as the resistance level.

An important property of moving averages in general is that they also indicate potential support and resistance by plotting a MA on a chart from the highest to the lowest point of the price trend to identify the direction of a trend. If a line is on an upwards move, the moving average line can be viewed as a support level and if it is on a move downwards, as a resistance level.

Support levels and resistance levels in a trading chart indicate prices, which appear to support or to resist the range of movement of a market.

Another important analysis tool is an oscillator that traders use to compare the range between highs and lows over a period of time.

To create a stochastic oscillator tracking momentum, two lines are drawn on the chart to create a type of channel or tunnel in which the price is mapped: one is the indicator and the other will be our signal line, or "trigger line". As soon as the signal line is crossed by another indicator or line, this is assumed to indicate that potentially important price action is about to take place.

The relative strength index (RSI) is an oscillating indicator - meaning that it moves back and forth between points -  shown as a line across a chart that helps crypto traders to determine the momentum - the notion that a trend of price increase or decrease of an asset will continue - by assessing whether this asset is in an oversold or overbought zone.

Overbought and oversold mean, respectively, that an asset has experienced a long or strong price increase or decline and increasingly fewer traders are willing to buy or sell at that level because they expect a market correction in the short term. An RSI indicates values between zero and 100, with an asset at a level of 70 deemed overbought and thus prone to a correction, while an asset at a level of 30 is oversold and possibly about to rally.

As its name suggests, a commodity channel index (CCI)  is an indicator that was originally created for trading commodities but it is also frequently used in other asset classes to identify overbought and oversold markets. The CCI is displayed separately beneath a chart. How does a Commodity Channel Index work?

A CCI consists of a line and an upper band at 100 and lower band at -100. The zone between the lines is the “normal” range, with indicator values above 100 traditionally considered to represent signals to buy and for long positions and beneath -100 to go short. If the indicator line crosses the 100-mark again downwards, the buy signal is cancelled. However, some traders use the 200 and -200 levels to detect respective extreme points.

What are Bollinger bands?

A key weakness of moving averages, however, is that they can only be used as reference during times a market is trending. Many moving averages map market behaviour with a delay, hence a short trend may already be over when the MA is just indicating it, and EMAs need a relatively long time span to “settle in” until they display coherent indicator values.

For this reason, crypto traders also rely on another tool for analysis: Bollinger bands are a chart analysis indicator developed by John Bollinger to indicate changes in trends. Bollinger bands come in pairs and look like curvy lines that sit two standard deviations above and below the moving average on a trading chart. In this context, standard deviation is the measure of an asset’s movement away from its average price.

Every time the bands move further away from the moving average line, the asset’s volatility is said to be increasing. It is important to note that Bollinger bands are typically only charted using the exponential moving average (EMA).

Now that you have done your research and you know the most basic trading indicators, you can delve further into your trading journey.