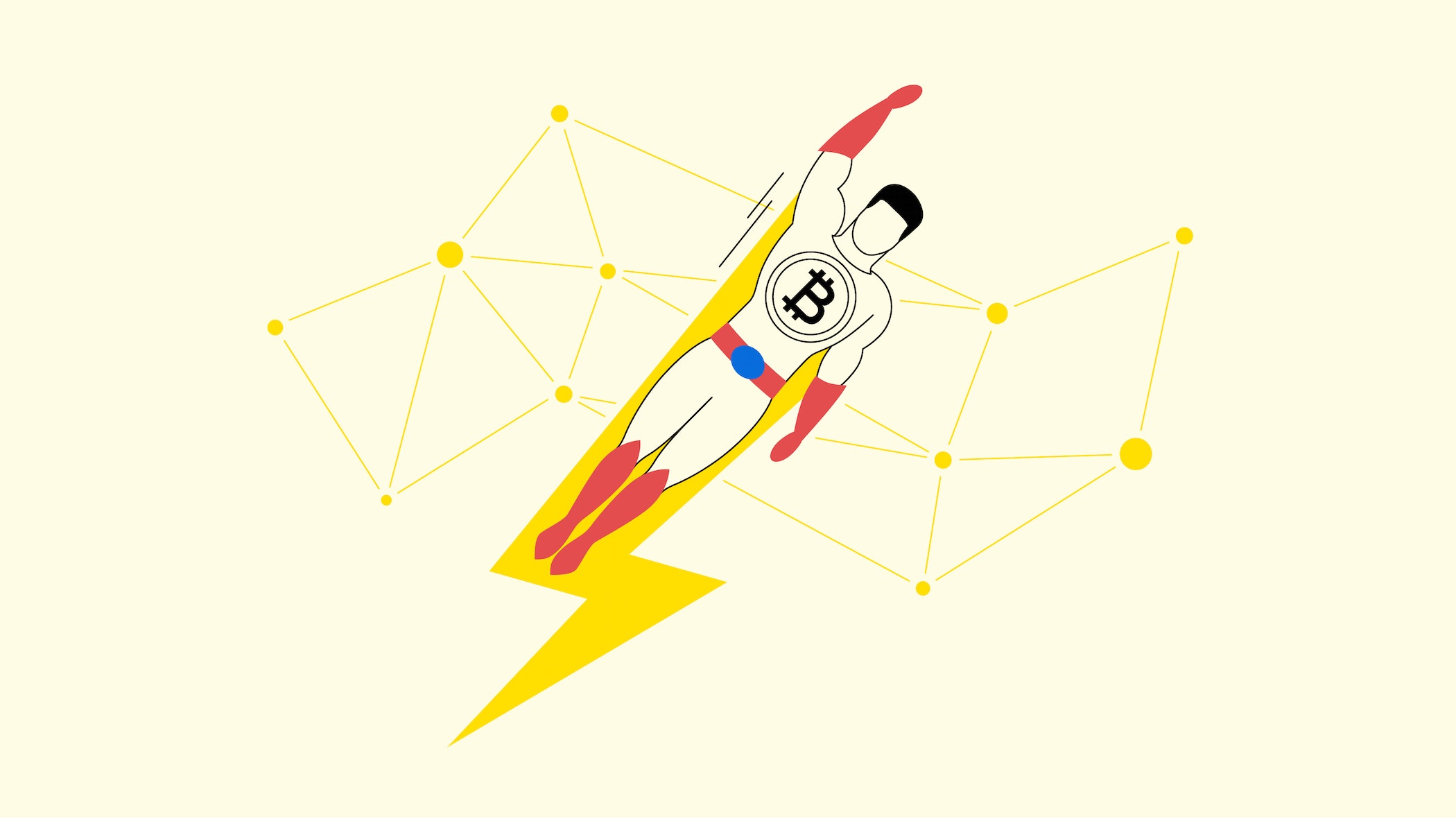 In response to Bitcoin network scaling issues, the Lightning Network was one of the proposed solutions along with SegWit.

In this lesson, you will learn everything about the Lightning Network.

A web of payment channels

For example, using a payment channel, two users in the Bitcoin network are able to send transactions and consequently update the balance of the channel up to a limit that has been locked in the payment channel beforehand.

After an initial transaction for funding has been made to open a channel in the Lightning Network, the users themselves can make any number of transactions with one another without these transactions being stored in the blockchain, consequently relieving the burden on the blockchain and scaling up the network in the process.

How does the Lightning Network support Bitcoin?

After each payment, the current balance is recorded in a “commitment transaction” that has to be signed off by both parties. This idea is based on a concept similar to that of a current account in classic commercial law, where periodic billing has been agreed upon as part of a permanent business relationship and mutual services are continually booked.

After each payment, the current balance is recorded in a “commitment transaction” that has to be signed off by both parties.

It is worth mentioning here that users should still pay attention to blockchain activity in regards to settling these transactions. It is possible that a user would try to settle an account with an out-of-date settlement transaction. The other party should, in this case, publish the later transaction settlement in order to dispute it.

How do Bitcoin users benefit from the Lightning Network?

It is not just Bitcoin’s block time that needs to be addressed before we can have that elusive cup of Bitcoin coffee. Transaction fees also need to be as low as possible, while keeping miners on the network, which is a delicate balance to maintain. Anytime a user carries out more than one transaction on the Lightning Network, the fees will be lower than the Bitcoin network fees.

Beyond payment channels in the network, there are also people running payment nodes, which charge fees to make sure payments get to where they need to go. These payment nodes are akin to transfer services like Transferwise. Their role is to find the quickest path for each payment and to keep all payments secure (alongside Lightning’s smart contracts).

This has already led to a jump ahead of Bitcoin’s average of 7-10 transactions per second. The trouble is in saying just how much that jump is as of now, since Lightning’s transaction speed is determined by how much Bitcoin has been allocated towards opening a channel.

Picture a secured credit card. If you only allotted $1,000 to it, then that is the maximum you can use at any time. So, while Lightning’s overall maximum transactions per second might be very high, it is more accurate to measure its capacity on a channel-by-channel basis. Since Lightning’s average channel capacity is just over $200 and the average fee per transaction is well under $0.01, it could already be well on its way to being the crypto network for everyday purchases.

What are the downsides of the Lightning Network?

Despite the surrounding hype, the Lightning Network has not quite reached its goal of making everyday payments viable. The average person cannot access it without the help of third-party wallet providers and payment facilitators. These third-parties, in turn, take fees for providing the services they provide. Essentially, the Lightning Network has not really made Bitcoin or any other cryptocurrencies more user-friendly.

Payment nodes are a double-edged sword

Payment nodes both assist users and complicate the process of scaling the Lightning Network at the same time. On the one hand, they do make it simpler for the average person to join by partnering with widely-used wallet providers and thus eliminating the friction of understanding the technicalities of payment channels. On the other hand, they make it more difficult for people who are new to the Lightning Network to get on board. Essentially, there is an extra step between peers in a peer-to-peer network.

Similarly to miners, payment nodes are like businesses that rely on fees to exist. Therefore, it may only be a matter of time before they begin to prefer processing those transactions that have paid higher fees to those with smaller amounts, which would go against the vision of working on Bitcoin adoption in daily life. It will be interesting to see how the Bitcoin community will address these issues.

What is the Lightning Network?

How Payment Channels Build Up a Network

How Difficult is it to Use the Lightning Network?