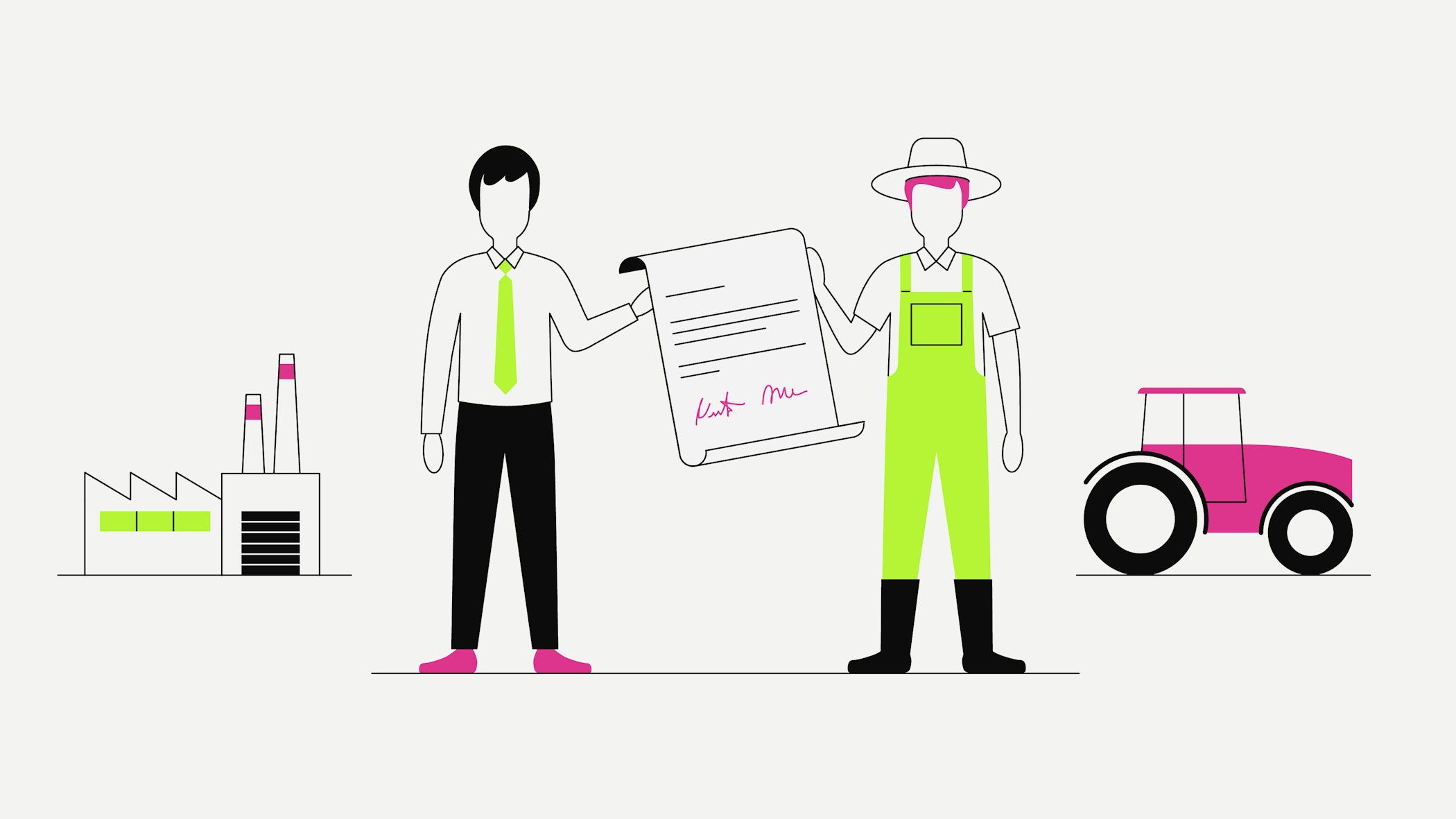 Like you learned in previous lessons, securities are tradable financial assets, such as stocks, bonds, banknotes and others. A derivative is, like the name implies, a secondary security derived from another security.

In this lesson, you are going to learn about the basics of derivatives.

*A WORD OF CAUTION: Derivatives are considered high-risk products and are suitable only for advanced and experienced investors who have sound knowledge of finance and capital markets.

If an asset is “not liquid”, this means it is difficult to sell, i.e. to convert into cash. This may be especially true of tangible assets such as real estate or commodities like oil, rice and others. Remember that one of the solutions to the problem of low liquidity was the securitisation of assets.

What is a derivative?

The verb “to derive” has its origins in the Latin word “derivare”. This means something along the lines of “leading or drawing off (a stream of water) from its source”. Hence, a derivative in the simplest sense is something that is based on something else, or an extension of something else. In the language of finance, a securitised contract whose value is derived from an underlying entity is referred to as a derivative.

Underlying assets - “underlyings” - of derivatives may be stocks, bonds, interest rates, indices, commodities, currencies and other financial products. If the value of an asset that is underlying a derivative changes, the derivative’s value changes accordingly.

The “securitisation” of an asset means securing in writing on paper who the asset belongs to and under which circumstances. Through securitisation, securitised assets are then considered fungible investment products. They can now be bought, sold and traded as “securities”. Therefore, the securitisation of an asset makes it easier to transfer an asset from one party to another. As a result, securitisation basically gives an asset liquidity. The asset can now be converted into cash much easier.

So, are derivatives securities?

A word of caution: the names of individual products for securitised derivatives are often not standardised, thus investors have to make sure they analyse the sales prospectus in detail to determine specifics.

Derivatives are used mainly for two types of purposes: for speculation or to hedge against price risks, currency and exchange rate risks.

Let’s take the example of a bean farmer doing business with a producer of canned chilli. The price of beans is based on the demand and supply of beans. Obviously, it is in the interest of the bean farmer that the bean price is high in order to get as much money as possible for selling their beans to the producer. On the other hand, it is in the interest of the producer that the bean price is low so that he has to pay as little possible for the beans he buys from the farmer.

What does “to hedge” mean?

Let’s say the bean farmer expects the price of beans to fall and the producer expects the price of beans to rise. For this reason, the two parties now enter into a contract stating that a set amount of beans will be sold at a set price, at a set point of time in the future, regardless of the future market price at that point. This type of derivative is called a forward contract (often just referred to as a “forward”) and it means that the two parties have fixed a price at which the farmer will sell the beans to the producer - similar to a type of insurance policy.

Why are they doing this? On the one hand, the farmer wants to “hedge” (to reduce their potential losses) against future price decreases. On the other hand, the producer wants to protect themself against a possible increase in the price of beans. If the bean price does end up falling, the producer will incur losses because he could have bought the beans for less. If the price of beans ends up rising, the farmer will incur losses because he could have sold the beans for more. Therefore, in the end, the interest of only one of the two parties can be met.

An oil futures contract constitutes an agreement stating a set price on a set date to sell or to buy a certain quantity of barrels of oil.

Another reason derivatives are popular is for purposes of speculation. Remember, speculation means that an investor enters into a transaction in the hopes of generating significant profits while there is a substantial amount of risk involved as well. Speculators exclusively invest in different types of derivatives with the purpose of generating high profits. As you saw in our example above of the forward with the bean farmer and the chilli producer, forwards are not necessarily standardised, traded on an exchange or regulated.

Futures, on the other hand, are similar to forwards but they are standardised, regulated and traded on exchanges, especially with regard to commodities such as oil, orange juice, precious metals and many others.

For instance, an oil futures contract constitutes an agreement stating a set price on a set date to sell or to buy a certain quantity of barrels of oil. The futures contract requires the seller to sell and the buyer to buy in any case while they are speculating on the future price development of the underlying asset.

What is an option in financial markets?

When investing in an option, on the other hand, investors have a right to buy or sell an asset at a specific price but not the obligation to do so if they decide they don’t want to. Like the name indicates, this is “optional”. An option is a contractual instrument that allows the buyer special rights to buy.

What is a call option?

Options are classified into two types and are considered an exceptionally high-risk type of investment for experienced investors. Call options allow the buyer to buy an asset, like a share, at a stated price - the so-called “strike price” - within the time period specified in the contract. In this case, the sentiment of the buyer is bullish and the sentiment of the seller is bearish. This means the buyer expects the price of the share to increase while the seller expects the share price to decrease. Warrants, on the other hand, entitle the holder of the warrant to buy a share at a fixed price (the exercise price) until a set date.

What is a put option?

With a put option, the holder has the option of selling an asset at a stated price within a set time frame. In this case, the sentiment of the seller is bullish and that of the buyer is bearish, meaning the buyer anticipates a price drop while a potential seller expects the share price to increase or to stay the same.

“Exercising an option” indicates that the holder of the option  makes use of the right to buy or to sell by that set time and date.

In any case, the option may be exercised by a set date in the contract. In this case "exercised" means that the holder of the option may make use of the right to buy or sell by a set time and date with a previously-arranged price.

Swaps are a highly-advanced category of derivative contracts. They are considered the most successful financial innovations of recent years. Swap transactions are individually and privately agreed between the contractual partners over-the-counter (OTC). They are not publicly traded.

Most swaps are concluded by banks with other credit institutions or non-banks. The particular risk of swaps for banks is inherent in the period of time a swap transaction is valid because the market value of the swap transaction can change during the term set in the contract.

In the scope of a swap, the parties enter into a contract to exchange opposing future cash flows (payment flows), namely a receivable or other asset and a liability. Receivables or liabilities in the same currency, or two different currencies, are exchanged. This is done with the purpose of arbitrage. This means the companies benefit from an advantage, such as difference in prices, interest rates, yields or other factors.

Since lending rates (loan interest) are based on market developments, an interest rate swap is ultimately a type of bet won by the party who was better at predicting developments. If the bank offering the swap predicted developments correctly, they make a profit from the difference between the fixed interest rate and the actual interest obligation.

The trading of derivative assets is often the cause of great controversy in the financial landscape. The most notorious incident to-date involving swaps occurred in 1995 when a British derivatives trader named Nick Leeson incurred massive losses through risky speculation.

As a result of inadequate control mechanisms, the dealings of Leeson caused the collapse of the oldest investment bank in the United Kingdom, the Barings Bank. His speculation ultimately led to a global currency crisis because the incident put incredible pressure on the British pound sterling. It actually took financial markets almost a year to recover halfway.

As you see, there is reason enough to stress that a great deal of financial knowledge, solid expertise and a good knowledge of taxes is a prerequisite for trading derivatives - derivatives trading is recommended for seasoned traders only.

In our next lesson, you are going to learn about the magic triangle of investing and why it is important.

What are derivatives and should you invest in them?

On the feasibility of decentralized derivatives markets

DeFi use cases: the best examples of decentralized finance