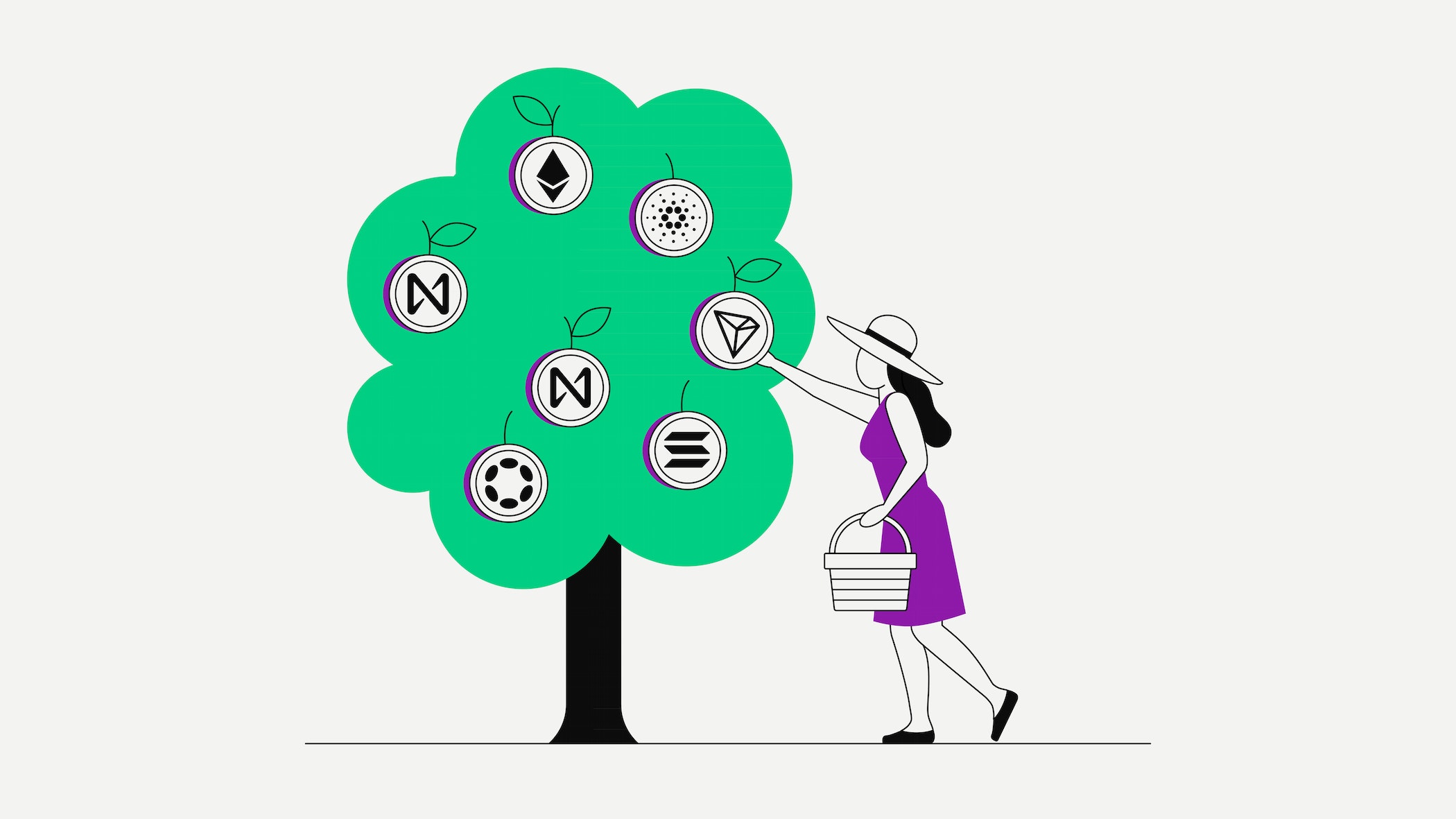 Crypto holders can generate extra income with staking rewards by staking their coins in a Proof of Stake (PoS) network or delegating their coins to a staking pool.

In this lesson, we’ll explain everything about staking rewards.

Like you learned in our article about stake pools in the Bitpanda Academy’s expert section, crypto holders can stake portions of their coins by joining a staking pool to support the security of the network for a certain period of time, which means they commit their tokens to a public stake pool and thus the network behind a coin. In return, they receive staking rewards.

Since each stake pool can increase its chances to be elected as slot leader and thus for validating the next block in a blockchain, stake pools look for delegators to participate in staking and for compensation with a share of the rewards in return.

What are validators and delegators?

Validation in a Proof of Stake (PoS) network involves processing, confirmation and the writing of transactions into a new block on the blockchain. Within a peer-to-peer network, a computer node that is elected to validate a new block is referred to as a “validator” and those validators that accept stakes from investors who are “delegators” and delegate smaller amounts of coins as a stake are referred to as “stake pool”.

Since each stake pool can increase its chances to be elected as slot leader and thus for validating the next block in a blockchain, stake pools look for delegators to participate in staking, for compensation with a share of the rewards in return.

What are staking rewards?

The term “staking” is derived from the concept of putting something (in our case coins or tokens) “at stake”, which means that you place a portion of your crypto assets in a staking pool for a set amount of time.

The reason why cryptocurrency holders put their coins “at stake” in a stake pool within a network is because they receive a share of the staking rewards awarded to the pool in return, similar to receiving interest payments on savings in the traditional world of finance.

While many cryptocurrencies pay out staking rewards in a network’s original coins or tokens, other blockchains have created their own or separate coins and tokens which are utilised as staking rewards, as well as for the blockchain’s internal operations.

How are staking rewards generated?

Staking rewards are subject to fluctuation depending on the number of staking participants that are staking, transaction volume and other factors. After committing their coins to a stake pool to support validation, participants receive the right to be eligible for adding a new transaction to the blockchain in return. The node which is allowed to validate a transaction depends on the amount of tokens held.

If a validator is elected and does validate the transaction according to network rules, staking rewards are automatically disbursed to that validator who, in return, disburses part of the staking rewards to holders that have delegated their coins. If a transaction turns out to be invalid or the elected validator happens to be offline, they are punished with a penalty fine, the amount of which is calculated as a percentage of the staking amount.

If a validator is elected and does validate the transaction according to network rules, staking rewards are automatically disbursed to that validator, who in return, disburses part of the staking rewards to holders that have delegated their coins.

After a coin holder wishing to delegate their tokens for staking selects a stake pool to participate in, coins can be delegated to the pool by activating the staking function in a special staking wallet.

Numerous projects require coin holders to “lock up” or “lock in” their funds for the time period for which they have been committed. While staking assets get locked in because during that time period, tokens cannot be moved out of a wallet or smart contract - which in this case also constitutes one of the risks of staking: Coins that are “locked in” cannot be sold during this time, even in the case of high volatility that comes with steep price increases and price drops.

An epoch in staking denotes the time period of one rewards cycle in a network that has a stakeable coin, for instance, 5 days in the Cardano network when staking ADA, with all the payout dates marked in an epoch calendar.

Each epoch is broken down into even smaller units of time called slots, with each slot lasting for one second - therefore an epoch of five days consists of 432,000 slots and on average, the nomination of a node is expected every 20 seconds. This nominated node is referred to as the “epoch slot leader” and if it produces a valid block, it is added to the chain and any other candidate blocks are discarded.

At the time of writing, more than 260 networks operate based on a Proof of Stake (PoS) consensus algorithm and offer participants staking rewards. Rewards that can be earned per year vary depending on market cap of the coin, with around five percent presumed for coins with large market cap and more than 50% for smaller projects. Reward calculation with approximate estimates is possible using a reward calculator.

What is the Annual Percentage Rate APR?

When calculating staking rewards, it is important to know a number of terms and understand what they mean. APR is short for “Annual Percentage Rate”. As the name suggests, the annual percentage rate is the interest rate on an amount stated as a yearly rate, in this case indicating how much interest is received for an invested amount after one year.

On the other hand, if you take out a loan, the APR indicates how much interest was accrued for the amount you borrowed over one year. This is when we are talking about simple interest if the amount is withdrawn or paid back after one year, for example.

What is the Annual Percentage Yield APY?

However, if you are looking to credit the interest to the invested amount to earn extra income from compounding, the “Annual Percentage Yield” (APY), also called absolute interest rate, indicates the percentage rate of interest including compound interest on an amount. When you do your research, don’t forget that figures for APYs and APRs are calculated adjusted for liquidity, price volatility and much more.

As investors can earn APY in DeFi through staking assets, providing liquidity through yield farming to liquidity pools and crypto savings, make sure to consider that your earnings also depend on how long you stake a coin, fluctuations in crypto prices and other things. Time periods to calculate payouts - the duration from delegation of coins to a stake pool that mark the starting time for delegating consensus power to a pool which creates coins in the name of delegators - also vary from coin to coin.

What are the fees for staking?

When you join a staking pool, you are usually required to have an, albeit usually low, minimum balance of coins to participate. Also, keep in mind that when calculating the extra income you could earn from staking that just like in cryptocurrency transactions, there are various fees involved such as service fees that stake pool operators charge participants for operating a pool. There is also usually some form of staking fee for delegating tokens as well as a pool margin on staking rewards before they are distributed to all participants. Pool operators also regularly receive a share of transaction fees and newly-minted tokens if they operate their node in full compliance with the consensus.

What are the risks involved in staking?

As always, there is usually some form of risk involved in crypto and it is no different with staking. Volatility may also affect the outcome of staking and there are no guarantees as the staking process is randomised and price fluctuations need to always be taken into account.

This does not only hold true if you are staking your coins in a project that requires you to lock in your assets for the duration of staking which means that there is no way you can sell them even during the price crash, your staking rewards may also appear meagre in face of possible losses.

Furthermore, be aware of ever-increasing numbers of scam projects that dot the crypto landscape, prompting you to send tokens to scam websites and fraudulent wallets while trying to incentivise you with rewards that sound too good to be true - they are.

Now that you know all about what to consider when you are calculating your potential staking rewards, we are ready to look at why gold became the queen of precious metals in our next article.

The next big business in crypto is staking

The many layers of staking in the DeFi ecosystem

There is a greener way to mine crypto