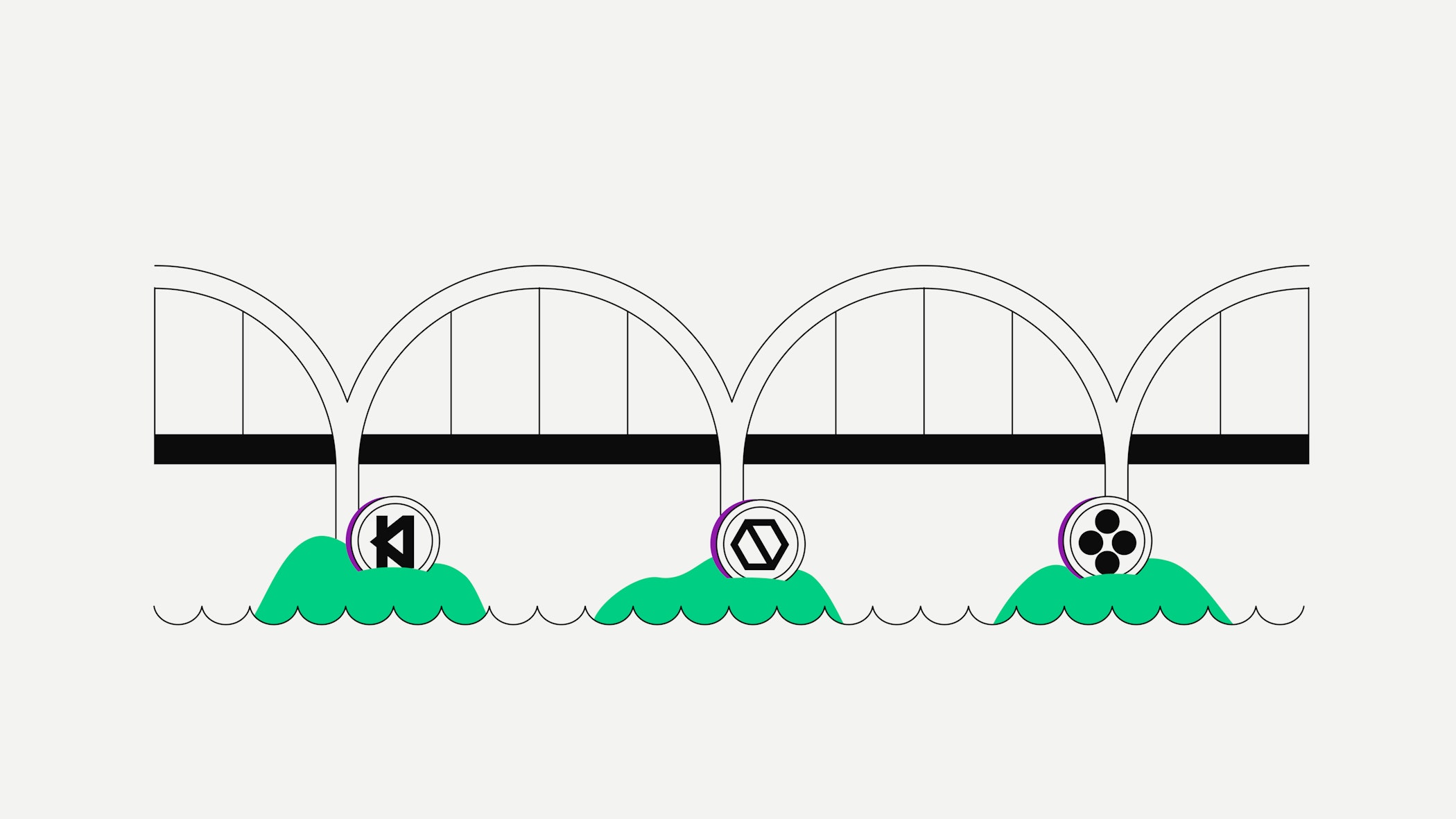 The Pantos project is an open-source scientific research project being developed in collaboration between Bitpanda and multiple stakeholders to solve cross-blockchain interoperability.

In this lesson, you will learn about Pantos and how cross-blockchain token transfers can be solved.

The need for cross-blockchain interoperability

In lesson 24 of the Bitpanda Academy intermediate section, you learned about the basics of atomic swaps. At their current stage of technological development, conventional atomic swaps are inconvenient to use, preventing mainstream adoption. Cryptocurrencies traded in the scope of an atomic swap need to have the same hash algorithm and be executed during the time window set in the smart contract of the relevant hashed timelock contract (HTLC), which is cumbersome if users are in different time zones.

Pantos is a multi-stakeholder project with the objective of researching and providing novel, innovative solutions for cross-blockchain interoperability.

The Pantos project is an open-source, scientific research project developed in collaboration between Bitpanda, the Austrian Academy of Sciences as well as the Research Institute for Future Cryptoeconomics (RIAT) and the Technical University of Vienna.

What’s in the name “Pantos”? The prefix pan- is derived from the Greek πãv, used in English for ‘all’, or more liberally, ‘everything’. The second syllable in the name, -tos, is simply short for “token system”.

While the need for collaboration between organisations using different blockchains is increasing along with the number of use cases, there are several projects around cross-blockchain interoperability in the works.

Contrary to the decentralised nature of blockchain technology, actual blockchain networks used in industries are not decentralised in the sense that they are open and thus, do not communicate with each other. Rather, each has a specific focus and characteristics, allowing ecosystems to operate next to each other in a fragmented landscape instead of reaching the full potential of blockchain technology. Read and find out why the Pantos project has set out to change this.

Pantos approaches the challenges of cross-blockchain interoperability based on Token Atomic Swap Technology (TAST). TAST is actually not a technology but another research project regarding the moving of assets between numerous blockchains, without users risking loss of their funds.

The project has the objective of enabling seamless cross-blockchain token transfers through the creation of a standardised interface for the interaction of multiple blockchains and by establishing a decentralised multi-blockchain token system.

The technology behind Pantos utilises cross-blockchain transaction verifications based on Simplified Payment Verifications (SPV). The first phase of the Pantos project saw the development of a prototypical blockchain relay capable of performing SPVs that enables users to move assets between blockchains.

A while back, Testimonium, a secure and cost-efficient novel blockchain relay scheme, was proposed by the research team behind Pantos. Testimonium is able to reliably verify the inclusion of transactions across blockchains while significantly reducing operational costs for the block header search algorithm.

The concept behind SPVs actually draws from section 8 of the original Bitcoin Whitepaper elaborating on how Bitcoin can be used without running a full network node. When a new transaction is received on any blockchain, it has to be validated by a node to verify there is no double-spending, that is, that the transaction input has not been spent previously. On using SPVs, the Bitcoin Whitepaper outlines that:

It is possible to verify payments without running a full network node. A user only needs to keep a copy of the block headers of the longest proof-of-work chain, which he can get by querying network nodes until he's convinced he has the longest chain, and obtain the Merkle branch linking the transaction to the block it's time-stamped in. He can't check the transaction for himself, but by linking it to a place in the chain, he can see that a network node has accepted it, and blocks added after it further confirm the network has accepted it.

Only block headers are used for reasons of storage cost and capacity, as block headers contain sufficient data to verify the inclusion of a transaction within a block. For Testimonium, off-chain computers submit and possibly dispute block headers which are otherwise optimistically accepted on the destination blockchain.

An additional advantage of the Pantos project is the promotion of collaboration among various developer groups and cryptocurrency communities, fostering innovation in the blockchain space, while participation is encouraged by an incentive structure and malicious behaviour is discouraged in the system.

The roadmap of the Pantos project is structured in three phases while continually moving the project towards decentralisation and community control and ownership.

The first phase of Pantos provides an initial, centralised Proof of Concept in providing a platform on which the later goal of decentralisation can be accomplished with the first version of Pantos as an interim solution. In IT, Proof of Concept is used to show the technological feasibility of an idea.

This phase entails the shifting of PAN, the cross-blockchain token of Pantos, between multiple blockchains via Bitpanda as the key-connecting element of technology between blockchains. Using PAN allows for seamless transfers of value between blockchains, without any additional charges in a trustless manner beyond any transaction fees paid to miners and without the need for a third party.

In the second phase of the Pantos project, plans are underway to release a public API facilitating automatic shifting of PAN between blockchains. API stands for "Application Programming Interface" - an interface connecting software and hardware components, such as applications, hard drives or user interfaces.

Once the implementation of Proof of Concept in phase 1 is successfully executed, PAN users are no longer bound to any specific interface and can then begin the second phase of performing systematic (algorithmic) trading while utilising Bitpanda. Adopters may also design and implement their own trading UXs/UIs and program trading bots, with the long-term objective of performing automated arbitrage through automatic transfers between blockchains, subject to solving the issue of speed.

The third and final phase involves the utilisation of atomic swaps, the Lightning Network and smart contract technologies for the complete decentralisation of PAN trading. In this phase, the plan for Pantos is to function as a fully decentralised multi-blockchain token system. The interaction of PAN tokens is to take place via various distributed smart contracts to facilitate trades between users. The objective is to exchange PAN tokens directly between blockchains without involving a centralised party.

Thanks to its portability feature, the ultimate objective of PAN is to become the first universal denominator token and the key element of a new crypto-economic metric: a Blockchain Dominance Index indicating token usage such as activity and distribution among blockchains while monitoring activity.

Arbitrage is the execution of financial transactions with the aim of benefitting from price differences that the same asset can have in different markets and the ability to profit from such differences until they diminish to zero. In general, values between exchanges are almost perfectly aligned in fully-functioning open markets. Pantos technology has set out to enable near-instant arbitrage between exchanges. If differences in price emerge, traders can take advantage of emerging price differences between cryptocurrency pairs on different exchanges using the Blockchain Domination Index.

Arbitrage is the execution of financial transactions with the aim of benefitting from price differences that the same asset can have in different markets and the ability to profit from such differences until they diminish to zero.

In October 2020, the blockchain-interoperability technology of Pantos reached a major milestone in the scope of implementation on RBI Coin, a digital cash solution for intercompany and interbank payments developed by Raiffeisen Bank International (RBI) for streamlining cash and liquidity management. The goal of the partnership is to address interoperability issues between different blockchain applications and use cases in a fragmented space.

The coming era of a decentralised internet necessitates the development of a space in which people with different kinds of expertise can collaborate and develop innovative tools and products.

For Bitpanda, Pantos is, first and foremost, intended to foster a more open, healthy and fair cryptocurrency ecosystem while honouring and preserving privacy, collaboration and decentralisation that are the essence of blockchain.