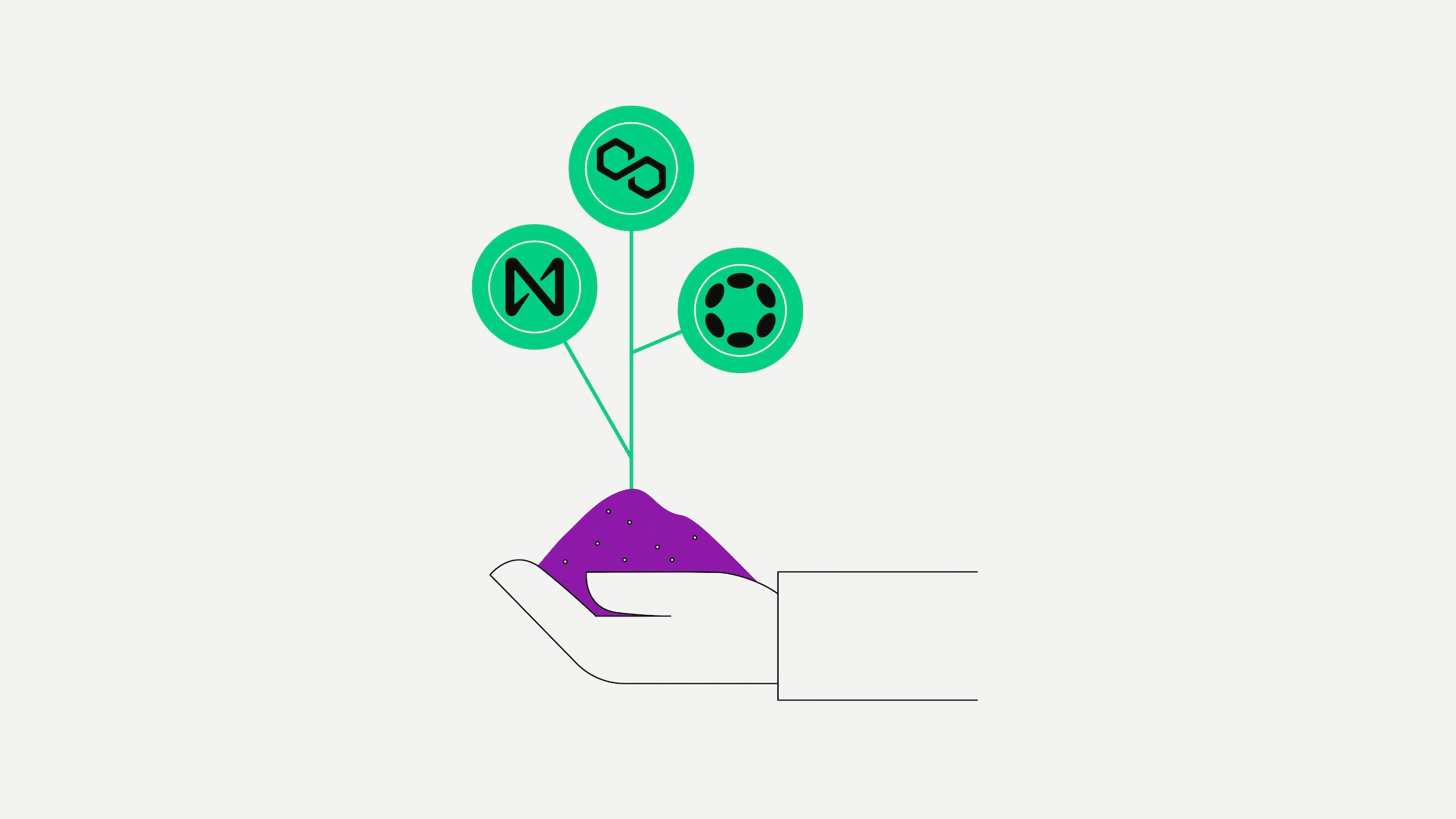 Staking cryptocurrency is gaining increasing popularity in the crypto market. Staking crypto means that crypto holders use their coins to keep a network safe while updating a blockchain. In return, they receive rewards.

In this lesson, you will learn how to start staking crypto.

In the world of traditional banking, investors receive interest payments on the deposits they make to their savings accounts. As the world of decentralised finance is increasing in importance, new options become available to cryptocurrency holders to earn extra income with crypto. One way is to receive rewards for staking crypto holdings.

One of the prerequisites for staking a cryptocurrency is that a network runs based on a Proof of Stake (PoS) algorithm or Delegated Proof of Stake (DPoS) algorithm. This means that consensus in a blockchain is reached via certain mechanisms that relate to placing a stake in a network in some way. Placing a stake or putting in a stake means that users commit a certain amount of tokens to a network for a certain amount of time and receive rewards in return.

In a PoS network, participants place a certain amount of the network’s currency in a wallet connected to its blockchain and the deterministic algorithm selects parties who validate the block based on parameters involving their stake (ie. the amount of tokens, age of tokens and other factors). The network protocol determines who is elected for validation of the next block at random.

This means that block creators (“validators”) in the network are limited in creating blocks and receiving rewards depending on the amount committed to the network, putting wealthy participants at an advantage. As a general rule, the more coins are staked by a participant, the higher their chance of being selected as validator. In some ways, you can compare PoS to a lottery and each stake to a ticket participating in the lottery and those with more tickets have a higher probability of winning. One of the prerequisites involved in being a validator is that your node needs to be online 24/7 to receive staking rewards - it won’t receive rewards if it is offline.

DPoS for better chances using the example of ADA

However, crypto holders who wish to participate can still do so by “delegating” their stake to  vote with their tokens in the election of block producers validating transactions and receive a share of the block reward in return.

For example, in the Cardano network with its native token ADA, transactions in the blockchain are subject to validation by so-called epoch slot leaders. Epoch slot leaders are stake pools that are online around the clock at all times, meaning that if you delegate your coins, the pool commits the coins to the network for you in return for a fee - you don’t need to be online yourself and will still receive rewards.

A pool is elected depending on the dimension of its stake - the more committed to a pool, the higher its chance of being elected. In return for validating blocks, the pool receives rewards in ADA which are then distributed to the operator and delegators of that pool.

If you delegate your coins, the pool commits the coins to the network for you in return for a fee - you don’t need to be online yourself and will still receive rewards.

Let’s take a closer look at the following three options if you are looking to start staking crypto yourself: ​​staking your coins on a crypto platform, delegating your coins to a pool by yourself and running your own pool.

What happens during an “epoch”?

Each stake pool is authorised by the network and chosen for given time periods (in the Cardano network and some other networks, these time periods are called “epochs”) to validate new blocks.

At the beginning of this time period - “the epoch” - which is (usually) roughly around five days to one week, a list of participating nodes for constant operation is authorised and set up, subject to a sufficient number of tokens committed in a node for the epoch about to start.

After the epoch ends, committed tokens are marked as staked, tokens that have been requested to be unstaked and the unstaking requests themselves are also marked as well and delegators automatically receive their share of staking rewards (sometimes with a slight delay), usually paid out in network tokens to incentivise further staking.

Staking directly via a cryptocurrency broker is the easiest way for crypto newbies to start with staking.

How can I stake my crypto on a platform?

Staking directly via a cryptocurrency broker is the easiest way for crypto newbies to start with staking. Make sure you choose a reliable and credible broker you trust and find out about the mechanics before you start. All in all, staking directly on an exchange or a platform has a number of advantages.

First of all, only needing to use one platform for all your investments is very convenient. After researching fees and earned income, you can simply start your staking journey without prior technical knowledge and earn extra income while your assets are safely stored with one click.

On top, a platform may offer additional perks, such as weekly rewards payouts, auto staking of rewards for compounding your rewards and no warm-up periods or lock-in periods. In this case, participants can quickly and easily enable the staking function on their wallets without losing time.

What do I actually need for staking?

If you feel you want to set out on your own, there are also a number of things to consider. Before you start, make sure that you consider various factors such as a coin’s annual percentage yields (APY) and possible warm-up and lock-up periods as well as possible risks involved in staking. Also, find out everything around the staking rewards offered by the network of your choice and how much income you can potentially generate.

Obviously, you need to buy a certain amount of network tokens to use before you start staking tokens and some networks require you to put in a minimum amount. Keep in mind that some networks also have a “warm-up period” in place and you may need to stake your coins for a set duration (sometimes several epochs) before you are eligible for receiving staking rewards.

Also, you are going to need to get a staking wallet that supports staking a coin of your choice and set it up accordingly before you start - extensive instructions are available online. Make sure that you adhere to all the security measures in the process that you need to keep your cryptocurrencies safe.

Once you have set up your staking wallet, you can add funds in the network’s native token to your wallet and navigate through the wallet dashboard for the next steps (finding a pool, delegating your coins, etc.). The actual process starts once a stake transaction including a public key and staking amount is sent by you informing the network that you are delegating a certain amount of tokens for staking in upcoming epochs. Regularly monitor your wallet dashboard to see the rewards which are accruing, any fees and other details.

Setting up a stake pool

If you are a seasoned crypto veteran on all levels, maybe even with previous experience in operating your own node in a PoS network, and are committed to operating and supporting the network 24/7, you may be looking to set up your own pool.

Besides sound knowledge of development and operations, as well as the necessary system operation skills and server administration skills involved, keep in mind that being a stake pool operator means that you need to provide time, energy and resources towards the reliable, 24/7 operation of a network node. Running a node means meeting your responsibility regarding a network’s health and token holders delegating their tokens. It goes without saying that, by committing, you are expected to comply with the rules of the network.

Do I need to pay taxes on staking rewards?

As staking is a relatively nascent phenomenon in the crypto sphere, tax treatment of income from PoS is complex and has not yet been conclusively established in many countries. Depending on your country of residence, your income may be subject to taxation and the responsibility for taxes lies with you as an individual, which is why we advise you to contact your personal tax advisor for further information about your individual situation.

In our next article, you will find out how to choose a stake pool.