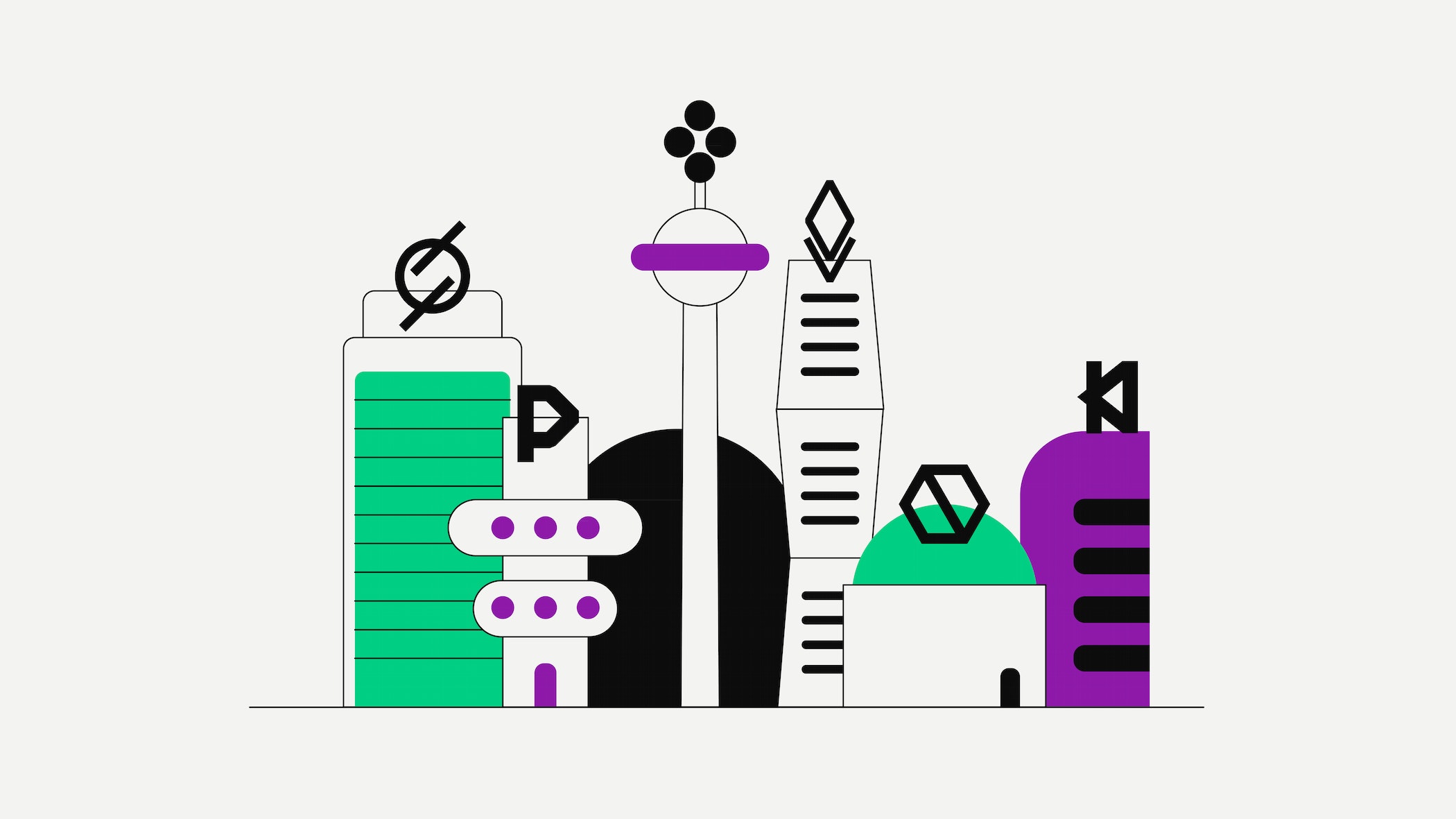 Cryptocurrencies are not only decentralising the landscape of finance, they are also bound to change the way we use the internet.

In this lesson, we will outline three possible future scenarios for cryptocurrencies and how they could influence the way we use the internet.

While, for most users, cryptocurrencies are first and foremost a store of value like digital gold or a medium of exchange, use cases for cryptocurrencies in the long term are bound to extend past peer-to-peer payments and could revolutionise the way we use the internet.

The Brave browser and BAT may decentralise all online advertising

The internet, as we know it in 2022, is flawed. As described in lesson 14 of the Bitpanda Academy’s intermediate section, companies are making massive profits from users’ data and tracking our every movement online. Advertisers pay these companies for access to their trackers. They feed advertisements to users and the cycle continues indefinitely.

In present systems, users are the product. However, in the future, this could be a different story. Instead of requiring users to view online advertisements without the possibility of opting out, the blockchain project called the Brave browser, which we have already outlined in our article on DApps, has basically made viewing advertisements optional.

Getting paid in BAT

If you do choose to view ads geared towards your preferences, you can get paid for doing so using Brave’s Basic Attention Token (BAT), an ERC20 token, directly to an in-browser cryptocurrency wallet. Even if you view ads according to your preferences, you can still block all trackers across all sites in-browser. Therefore, viewing Brave advertisements never exposes your IP address or any of your personal information to third parties.

While Brave’s and BAT’s potential stretches beyond just advertising, it would be through changes such as these that this model has great potential to make the internet more democratised.

How could this change true online privacy? In a future driven by Brave and its token, the project could greatly reduce data collection through advertising. The usage of data related to advertising would finally be transparent to the average internet user. Additionally, big tech companies dominating the global market could ultimately be forced to change their entire business models of selling users’ data to third parties in exchange for free access to their services.

Instead, if Brave were widespread, companies would need to sell advertisements through Brave’s model. It splits the profits from advertising campaigns between its team, advertisers and users. As a result, online marketing might truly shift from content mills developing SEO-driven articles to information that really does focus on user needs.

After launching BAT, the native token behind the Brave network on the Binance Smart Chain (BSC), Brave is developing a decentralised exchange (DEX) to reinforce decentralised finance and to incentivise liquidity providers by enabling token swaps and added value for users. While Brave’s and BAT’s potential stretches beyond just advertising, it would be through changes such as these that this model has great potential to make the internet more democratised, just as its pioneers envisioned.

The Internet of Things may be decentralised

We already live in a day and age where smart devices are exploding in popularity. By 2050, experts estimate that there will be at least 50 billion smart devices in use, all of which are connected to the internet. It is interesting to think for a moment about how much data everyday items such as your smartwatch, smartphone or even your smart thermometer already have on you right now.

Just like we are a product for internet companies offering “free services,” we are also the product for those companies that manufacture our smart devices.

In short, the answer is a lot. Every smart device being used feeds data back to a machine-to-machine area of the internet called the Internet of Things. Again, such data is often sold directly to advertisers for a considerable profit, just like Google and other companies do with our browsing data. Hence, just like we as users are a product for internet companies offering “free services,” we are also the product for the companies which manufacture our smart devices.

In the future, however, networks such as IOTA could shift this market trend in a different direction, one that actually benefits the average user. Imagine buying a smartwatch, or even an autonomous car that is tied to the DAG (Directed Acyclic Graph) with its own public and private keys that you, as the owner, activate after purchasing the car.

All of the data your car transmits would be sent to IOTA’s DAG and could be purchasable by advertisers there. However, since you, as a smart device user, actually own your device, you can either authorise or veto any third-party access to your data. If the entire process was run by the IOTA network, you, as a user, could charge for access to your data in the MIOTA cryptocurrency.

Any cryptocurrency that drives data transfer would need to have a consistently low value as it would be too costly for companies and users alike to use it otherwise. Historically, MIOTA already fits the bill in this respect since tokens and the entire IOTA network have been structured to be the future methods for machines to trade data among each other.

Death of the Coordinator

IOTA’s Chrysalis update improved transaction speeds and reduced validation requirements on the Tangle to provide enterprises with flexible architecture for implementation in preparation for a completely permissionless and decentralised network without the Coordinator as a securing (and centralising) application: Coordicide will see the “death of the Coordinator” and bring in GoShimmer, a decentralised, secure and scalable voting module based on proactive communication in the network.

Owners of smart devices could use an option in their built-in MIOTA wallet to allow automatic, recurring payments to third parties they trust without needing to constantly monitor activity on their smart device’s wallet. Advertisers would still be getting paid but they would actually be improving their reputation through making their activities fully transparent on IOTA’s network.

For the first time in history, the Internet of Things would be democratised in favour of the user since all data transfer and trading would be done transparently. Hence, with Brave and IOTA together, average users would essentially control their entire experience online, diminishing the detrimental effect of the black market where users’ data is sold.

Decentralised finance (DeFi) is on its way to reinvent banking

In line with the general idea of decentralising finance, DeFi tokens are well on their way to becoming a game-changer with a potentially massive impact on the way we save, borrow, sell and lend.

Remember the 2008 financial crisis. Around the globe, rampant speculation on mortgage-backed bonds of all shapes and sizes culminated in a global financial collapse of epic proportions. The emergence of blockchain technology was the reply to the lack of transparency and sense of betrayal in the aftermath of the crisis.

Satoshi Nakamoto deemed that traditional financial systems were inherently flawed and came up with a trustless and immutable electronic cash system based on consensus in a peer-to-peer network - this is how Bitcoin was created.

Just a few years later, decentralised financial (DeFi) applications running on public blockchain networks are leveraging decentralised financial services to the next level. The intention is to further diminish the need for intermediaries such as banks and other financial institutions, as well as decreasing counterparty risk and costs for risk assessment.

Most DeFi applications are based on smart contract functions in the Ethereum network. Agreement terms between savers, borrowers, sellers and lenders are transparent, accessible and automatically executed based on the terms and conditions encoded in a contract. DeFi allows for fast transaction processing and usually significantly reduces transaction costs.

Decentralised autonomous organisations (DAOs) are digital business structures in which members vote on processes, establish them and award contracts via a decentralised database. DAOs are the backbone of decentralised financial services (DeFi) and a fundamental part of the future of financial markets.

The number of DeFi use-cases and projects is evolving at a rapid pace, let’s take a brief look at two of them.

What is a DEX?

While the majority of crypto traders seem to still prefer using centralised cryptocurrency exchanges (CEX), decentralised exchanges (DEX) are growing in popularity. As the name implies, they allow users to trade peer-to-peer without a platform acting as an intermediary. Trading is completed with non-custodial wallets, meaning traders are responsible for their own transactions and wallets, as well as their public keys and private keys.

One of the most popular projects in the DeFi space providing a decentralised exchange DEX is SushiSwap with its governance token SUSHI. SushiSwap is a community-based project that was created based on a fork of the Uniswap project and features an AMM (Automated Market Making) system. This AMM brings liquidity to the exchange via liquidity pools that are created by incentivising users to deposit cryptocurrency assets to smart contracts. In this case, a user that has deposited takes the role of liquidity provider through a process called yield farming by lending their coins and, in turn, is rewarded with interest.

However, like many other DeFi tokens running on the Ethereum chain, SushiSwap also enables holders of SUSHI to exercise governance in the network for monetary rewards or other benefits for governing functions. This is why tokens that represent voting power in a network are also referred to as “governance tokens”. Governance may entail making suggestions or voting on protocol changes.

In some cases, this set-up may also backfire. An example would be a small group of users holding a large proportion of the tokens, causing centralisation of distribution which may adversely affect a protocol.

Another DeFi project is Augur, both a protocol for the creation of prediction markets on the blockchain and a DApp for these prediction markets. Users of Augur get paid for buying shares (“stakes”) in the outcome of real-world events by making correct predictions regarding the outcome, such as stock prices, derivatives, sports events, economic/political decisions and so on. If a user purchases shares in the “correct” outcome, they get paid.

Augur’s protocol is a set of Solidity smart contracts that are deployed via the Ethereum blockchain. An interested party buys shares in a bet through the smart contract - instead of a central intermediary - pays out profits after the outcome is clear. The smart contract stipulates that both parties placing an outcome have to lock in the funds to pay their prediction or bet on just about any event to avoid defaults.

The smart contract stipulates that both parties placing an outcome have to lock in the funds to pay their prediction or bet on just about any event to avoid defaults.

Based on its mechanism, Augur and its REP tokens could one day serve as a better base for all financial markets and beyond.

After this intro on how cryptocurrencies and tokens are disrupting finance, learn more about Decentralised Finance in Lesson 14 in the Expert section of the Bitpanda Academy or find out more about the inner workings of blockchain in our next article on Merkle trees.